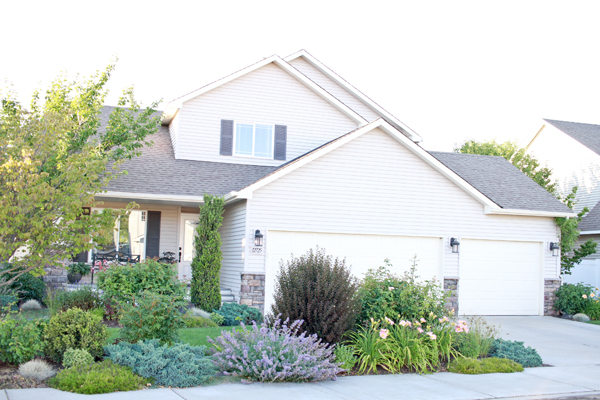 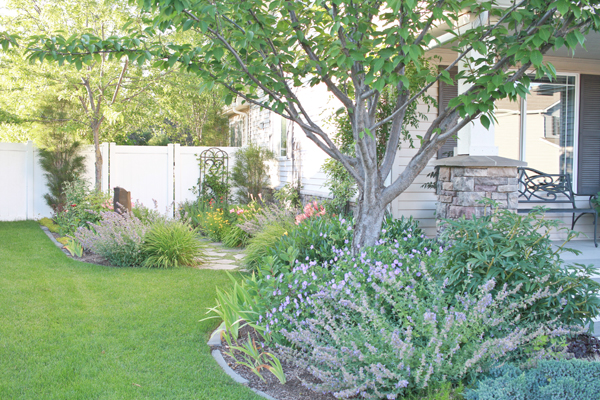 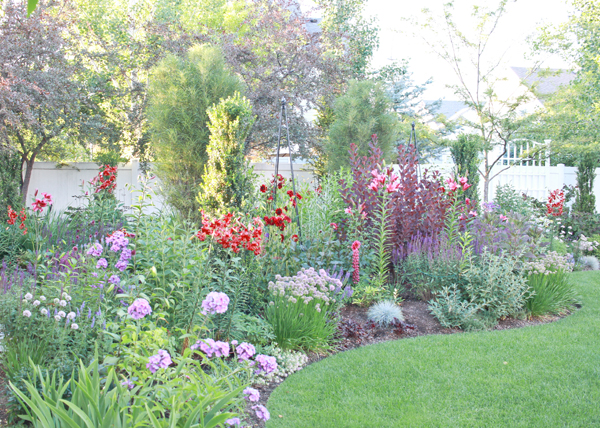 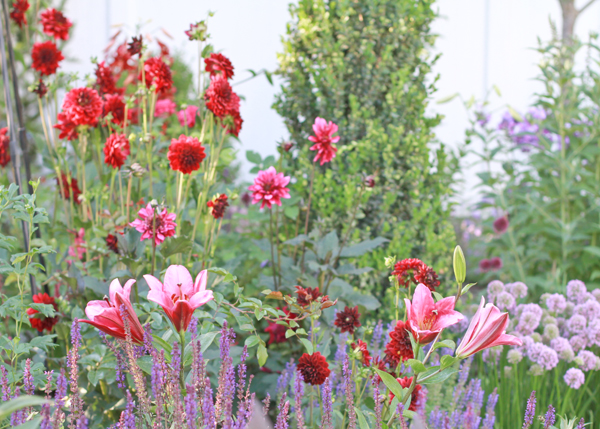 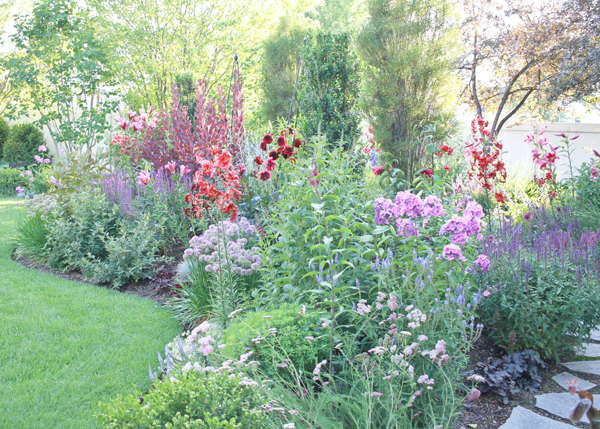 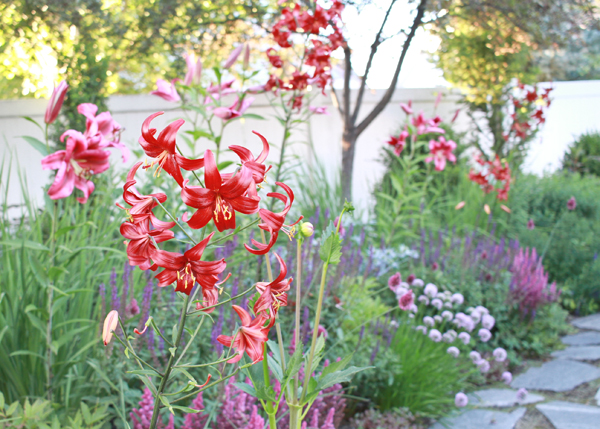 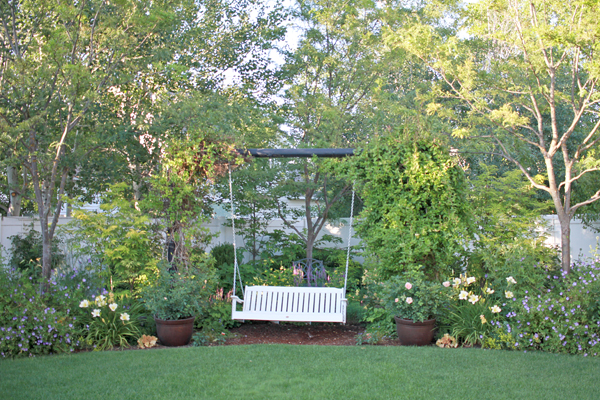 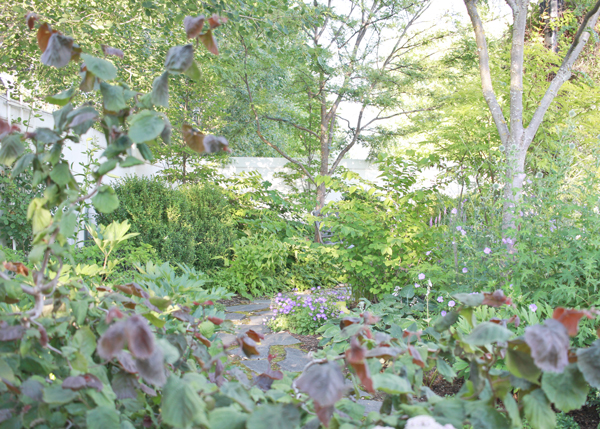 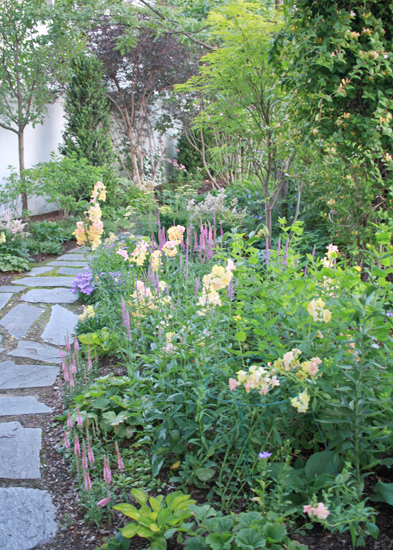 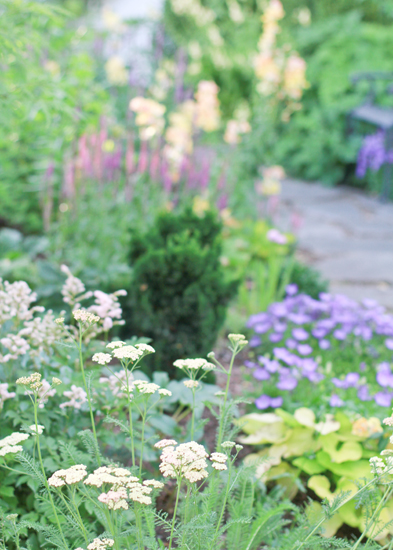 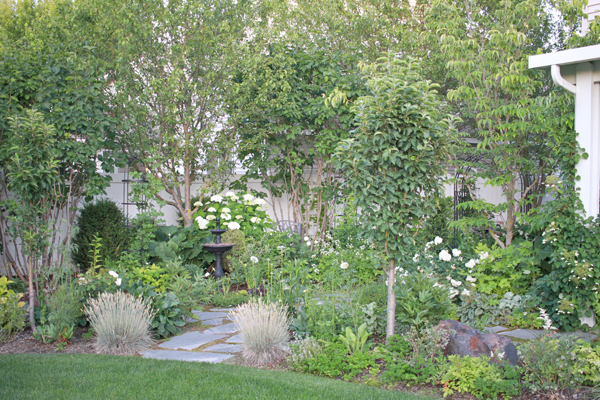 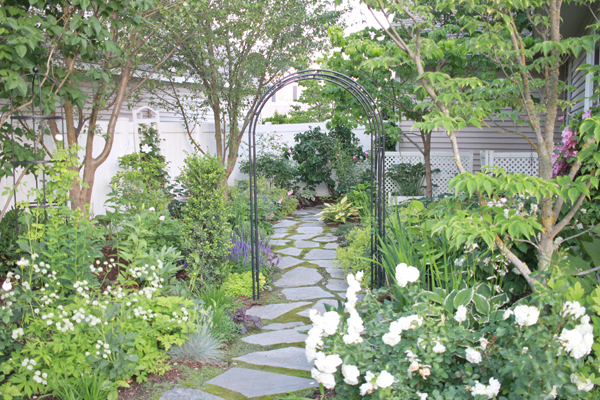 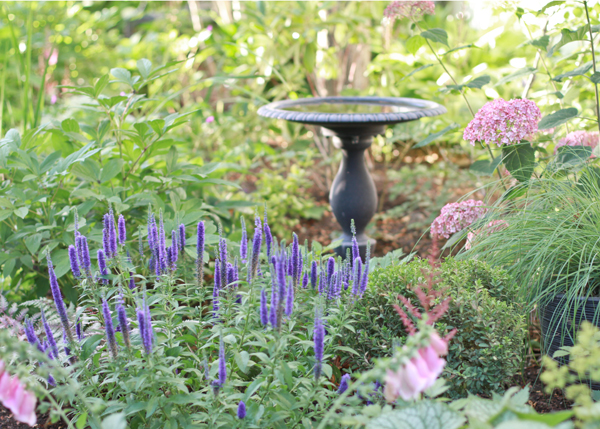 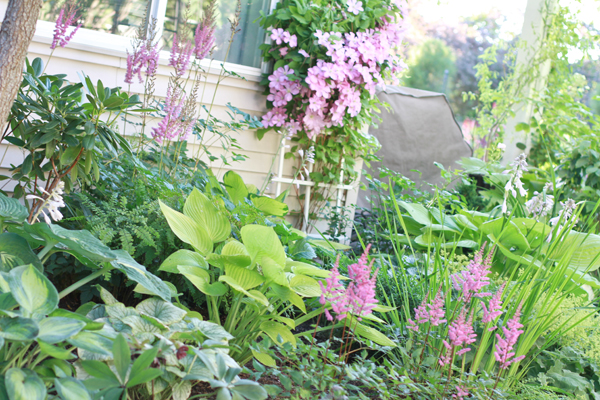 I'll finish with the view of the east side of the house.  Short 'Maggie Dayley' and tall 'Purple Candles' astilbe are in bloom in front of a 'Comtesse de Bouchaud' clematis.  I love the chartreuse leaves with the mauve flowers.
No comments: 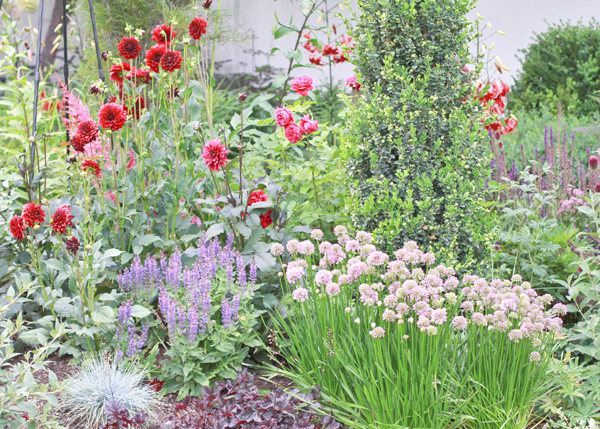 July is here and the northwest corner of my garden is blooming hard.  Above are 'Arabian Night' and 'Purple Haze' dahlias, a second flush of bloom on 'April Night' salvia, 'William Shakespeare 2000' roses, and 'Millenium' allium.  I've linked to May Dreams Gardens for the monthly Bloom Day celebration. 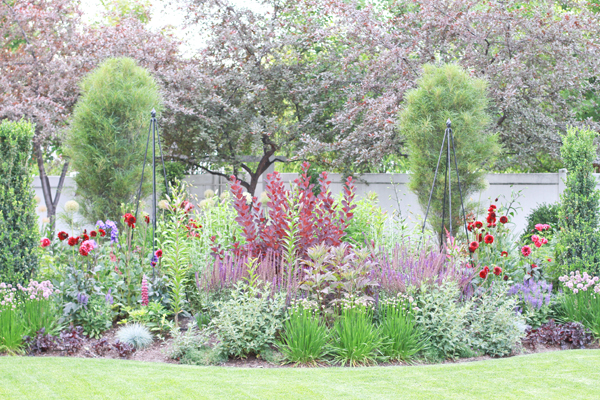 In the broad view of the area, you can see that the 'Caradonna' salvia is nearly finished blooming while the 'Millenium' allium are just about to hit their peak.  'Blue Chip' butterfly bushes will soon start producing color at front, while 'Purple Prince' lilies, Russian sage (Peroskvia) and 'Jeana' phlox will come into bloom at the back of the bed.  Next year this view might include deep red blooms on the newly planted 'Florentina' roses on the tepees. 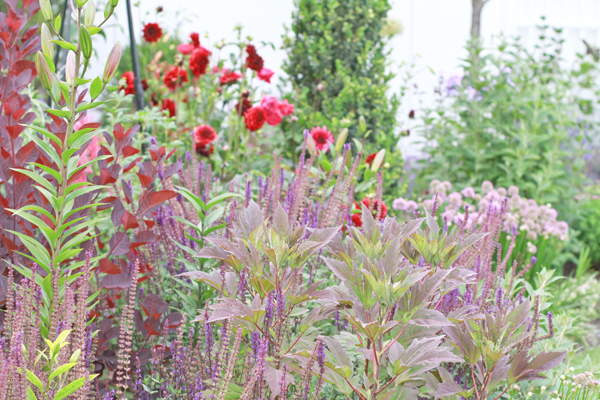 The 'Berry Awesome' hibiscus will bloom sometime in the next month, but for now the mauve-green spiky leaves are beautiful against the darker smoke bush foliage. 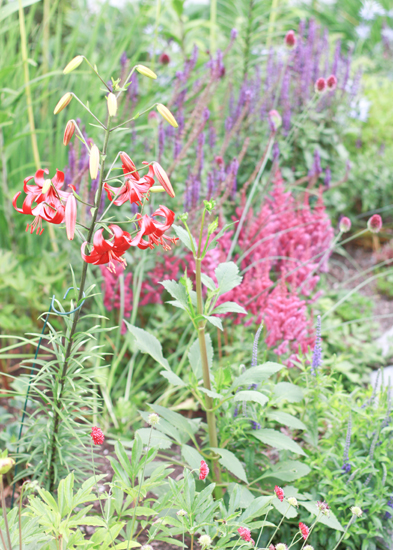 First-time bloomers this year include 'Red Velvet' lilies with dark red candelabras.  I ordered a dozen of this type from B&D Lilies last fall, and the large bulbs are producing numerous flowers already.  This hybrid is supposed to be tough as nails, so I'm hopeful they'll continue to bloom reliably for years to come. 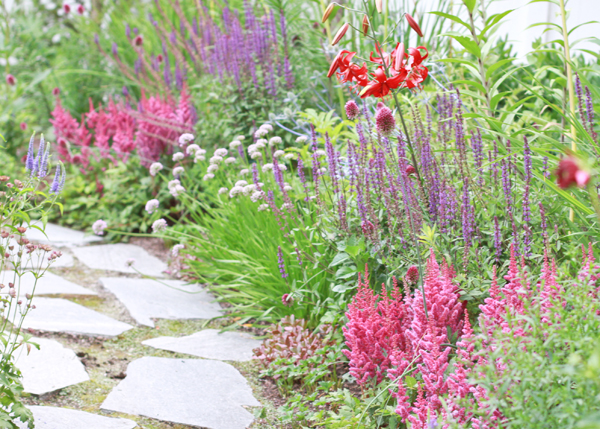 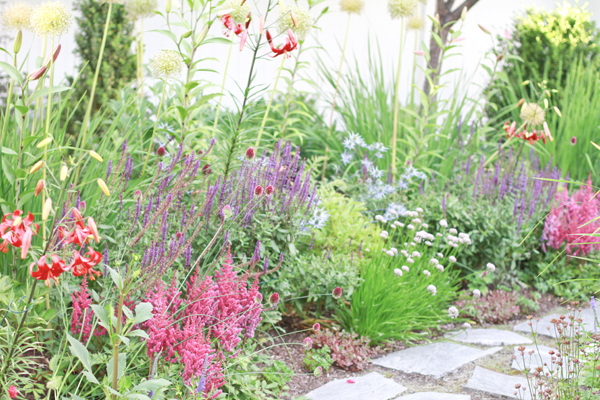 A view of the area from the opposite direction includes 'Big Blue' sea holly along with drumstick alliums and faded seedheads from 'Ambassador' alliums. 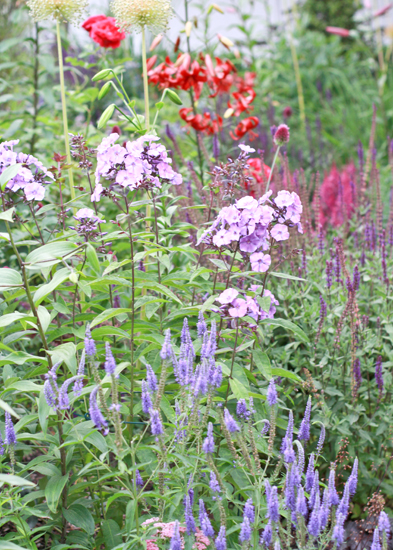 'Darwin's Blue' veronica and 'Blue Paradise' phlox cool down the palette of deep reds and purples. 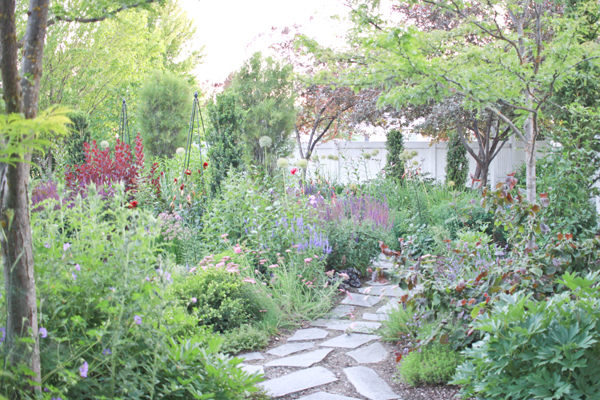 Just after sunset the area looks restful.  From this distance you can't see the jagged edges of leaves eaten by root weevils or the holes caused by slugs and earwigs.  We've been spraying Neem and Spinosad for organic control of these pests.  I'm crossing my fingers that the pest populations get knocked down by our efforts before the weevil larvae do more extensive damage to roots next winter.  Some of my peonies, hostas, geums and heucheras were smaller this year because of last winter's root damage by the larvae.  It's a continuing adventure, right?
4 comments: