About a week ago, my husband surprised me with proof of his love: a pile of cow poop. I was SO excited! Actually, the cow poop was in the form of 20 bags of composted steer manure from Lowe's. And he spread 10 of the bags into the new flower bed he had just cut out of the grass for me. That manure will rot away all winter and create fabulous soil for my plants - especially the rose bushes I hope to plant there next spring.
You see, the big secret to a great garden is - da-da-dum - great soil. If your soil is good, even cheapo plants from WalMart can thrive. But if your soil is compacted and barren of nutrients, the most expensive plants from the nursery will struggle to grow and bloom well. A soil high in organic matter (like rotting manure, leaves, or the product of your compost bin) allows plant roots to easily grow through the soil. It retains water better and feeds beneficial organisms like earthworms. You might not like slimy worms, but your plants love them.
Composted steer manure is the easiest, cheapest way to improve your soil. You can buy 1 cubic foot bags of the stuff at Lowe's, Home Depot or WalMart for just over a dollar apiece. Spread a couple of inches over your garden soil before planting. The worms, rain, sprinklers and your planting shovel will mix it in eventually, so you don't have to rototill it in. Most of the composted manure that we've purchased hasn't smelled like manure. This last batch (in green and lavender bags from Lowe's) was an exception, and our yard smells like a dairy. It must not have been allowed to rot long enough, but the smell will disappear in a month.
So here's a big Thank You to my husband! I don't ever need more diamond jewelry as proof of your love, but I'll happily take manure once in a while.
2 comments:

Email ThisBlogThis!Share to TwitterShare to FacebookShare to Pinterest
Labels: soil

As noted in my last post, I'm planning to order a Yves Piaget rose. I fell in love with it when my friend Sandy let me cut hers for arrangements. Here's a picture of one arrangement. Yves Piaget is the mauve rose. Too bad the picture can't capture the wonderful fragrance! 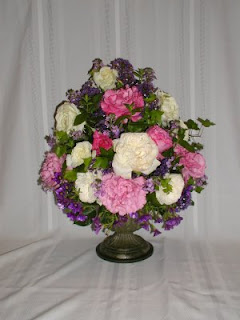 I might as well post some other pictures of arrangements that I've made. Here's one with white roses from Costco and light blue plumbago from my California garden (a vigorous shrub that isn't hardy here in Spokane). 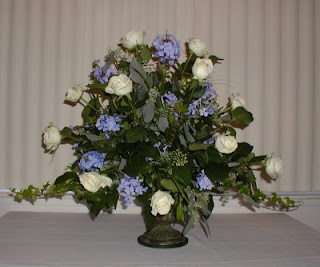 The following picture is of a bouquet that I did for a wedding in California. I love the warm yellow and coral roses with a touch of cool lavender larkspur. 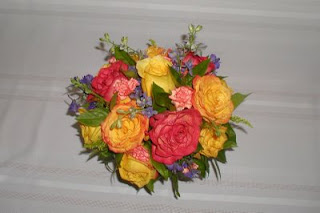 Here's one I made for my sister's wedding. We ordered the red roses from Costco.com, and they were shipped directly from Costa Rica (or somewhere else in South America) to our door. The stems were 3 feet long, and the flower heads were giant! They opened beautifully over several weeks. We bought a few additional roses from a local Costco, and they didn't compare at all in size, beauty or longevity. 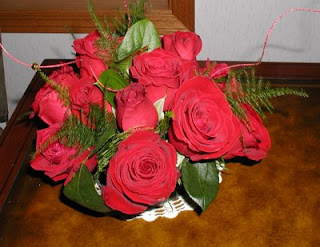 This final picture is of a cute bouquet that I made for a very low-budget wedding. I cut the pink Bonica roses and white daisies from my friend Abby's yard. I cut floral foam in the shape of a 'T', stuck the stems into the top part, and wrapped the bottom of the foam in a sandwich bag, taped it with clear packing tape, and wrapped ribbon around it. Very unconventional, but it worked just fine for the wedding! 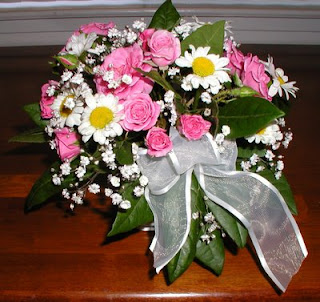 I was just doing some research on the rose Yves Piaget, which I plan to order bare root next spring. I found the website of the company that hybridized Yves Piaget, Meilland of France. There are some GORGEOUS pictures of roses on their site, and some are available to download for your desktop. If, like me, you cringe at the thought of the long winter ahead, it helps to have some beautiful pictures close by! Enjoy -

So Much for Restraint

A few months ago, I wrote extensively about my front yard design scheme. I called it "Pretty in Pink." The idea was to contain my plant-collector tendencies by limiting the color scheme to light pink and white. I have since learned that blending pinks is a difficult endeavor.
The four Eglantyne roses that I planted are a lovely, clear pink. Softer and sweeter than bubble gum, but similar. I also planted a number of daylilies, all advertised as pink. When "Hush, Little Baby" bloomed for the first time, I had an obsessive-compulsive-colorist panic attack. The color of this "pink" daylily was NOT pink! Well, at least not in the way my roses were pink. It was pink the way raspberries are pink, a deep color with a lot of greyness or muddiness mixed in.
Pictures of Eglantyne rose (available from davidaustinroses.com) and Hush Little Baby daylily (available from bloomindesigns.com). 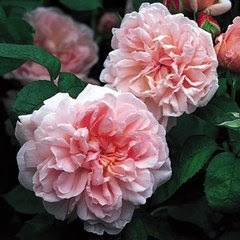 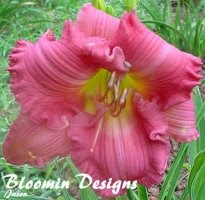 Now I personally prefer raspberry-type pink over bubble-gum-type pink indoors. I think soft greyed colors are easier to live with on walls and curtains. But I'm drawn to clear hues and pastels outside, and clear pink was what I'd pictured out front.
So out came all 9 "Hush, Little Baby" daylilies and all 7 "Sue Rothbauer" daylilies (good thing they were still tiny). They were transplanted to the west side of the house. In their place I planted one each of several softer pink daylilies, thinking maybe they'd blend better with the roses. I included Barbara Mitchell, Seminole Wind, New Testament and Millie Schlumpf (love the name!). None of them bloomed, so I'll find out next season.
Pictures of New Testament and Millie Schlumpf daylilies, both available from oakesdaylilies.com. 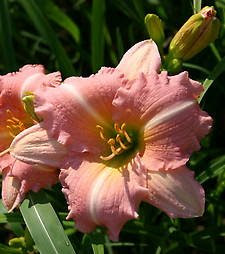 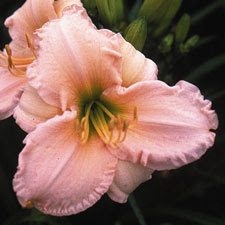 All of this has led to an expansion of the color scheme. If I couldn't find the perfect pinks (on plants that I liked), then I'd have to add lavender and possibly soft yellow. So far I've planted Nepeta "Walker's Low" (catmint), and I'm considering where to put "Big Blue" liriope. "WL" catmint won the perennial plant of the year award a while back for its long bloom season of lavender flowers and its overall toughness. It LIKES intense sun, heat and drought (once established). That makes it great for a few spots that the sprinklers don't hit very well. "BB" liriope has the same fountain shape as daylilies, though with spikes of lavender flowers. It isn't as tolerant of intense sun and heat, though, so I'll have to be careful about placement so the leaves don't fry next August.
Pictures of Walker's Low Nepeta (available from waysidegardens.com) and Big Blue Liriope (available from bluestoneperennials.com). 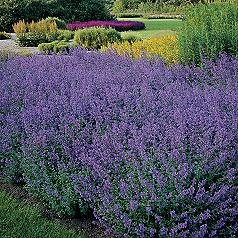 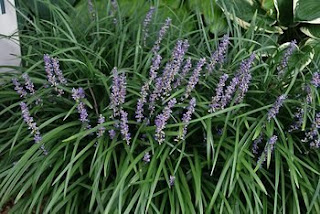 No doubt I'll be transplanting a few more things next season. Maybe none of the new daylilies will work with the roses. But hopefully I'll have things settled by the time the plants grow large enough to be difficult to move. Because my husband wore out his manual labor enthusiasm while planting 14 trees for me last month. Who knows how I'd convince him to move big daylily clumps AGAIN, all for the sake of the perfect pink scheme!
1 comment:

Obviously it's been a while since I posted anything. However, the first frosts have melted my hydrangeas and mushified my zinnias, so I won't be spending as much time out in the dirt (though I do have to get a few transplants into a new flower bed next week). What else to do during the long Spokane winter than read and write about gardening? My fingernails will be happy about the switch from dirt to keyboard.
I've learned a lot from this season of gardening as new plants have bloomed for the first time (note - dayliles are never really lavender, no matter how the catalog picture looks). I find myself thinking a lot about color. Some of my great plans didn't turn out so well. I've realized that it's much more difficult for me to create a cohesive design in my yard than in my friends' yards, because they don't have 200 plants on their "absolutely-have-to-have-this-in-my-garden" list. I do. Possibly more than that, and I just haven't met them all yet.
I'll share what I've learned in coming posts . . .
No comments: