The English roses bred by David Austin are my favorite garden flowers.  I love their elegant blooms and shrubby growth, which is so different from the stiffness of the more common hybrid tea roses.  English roses take several years to become well established and reach their mature size, especially in a climate with a short growing season like mine.  For the shrubs that are mature enough, I have included a photo of the entire shrub as well as a close shot of the flower.  Other shrubs and climbers will be updated with better photos as they mature. 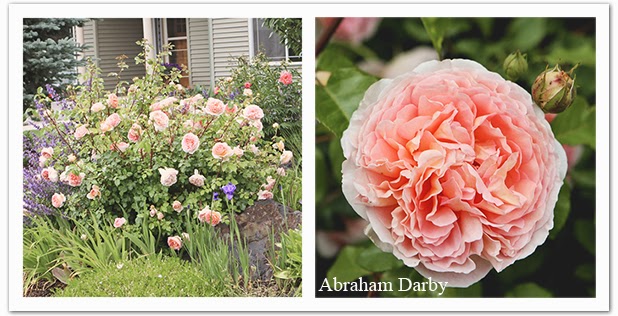 Three 'Abraham Darby' shrubs are planted close together in my front yard to create one large shrub.  Although this rose had big problems with rust in California, I have not seen any rust on it here in Spokane Valley.  It grows about 5' x 5' (though my grouping will be larger when mature) and produces extravagant large flowers with a delicious and strong citrus fragrance. 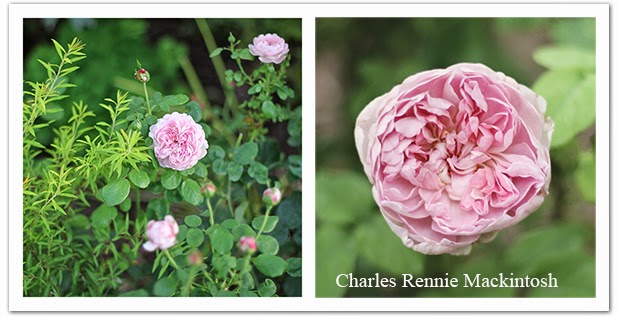 'Charles Rennie Mackintosh' is planted in partial shade in my garden, which might explain why it hasn't developed into a full, rounded shrub.  Despite its less than stellar overall growth, it produces a steady stream of pale mauve flowers that hold up very well in a vase.  Growing 4.5' x 3,' it has medium-sized flowers with a myrrh fragrance. 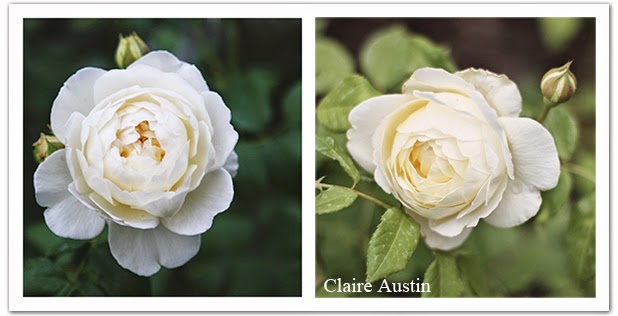 'Claire Austin' has been transplanted too many times to settle in and really start thriving, but I've enjoyed the blooms I've seen so far.  David Austin highly recommends this rose, so I expect it to do great things in the future.  I haven't noticed much fragrance yet, but it has done just fine in a vase.  The mature size is 4.5' x 4'. 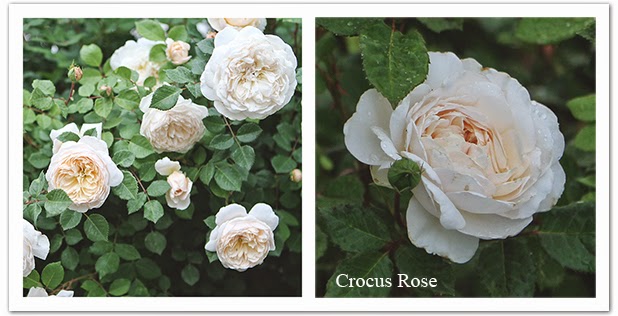 Creamy 'Crocus Rose' has been a fabulous performer for me despite growing in partial shade.  Its medium-sized flowers work well as cut flowers, though they do not have much fragrance.  Its normal size is 4' x 3,' and it makes a lovely, full, rounded shrub. 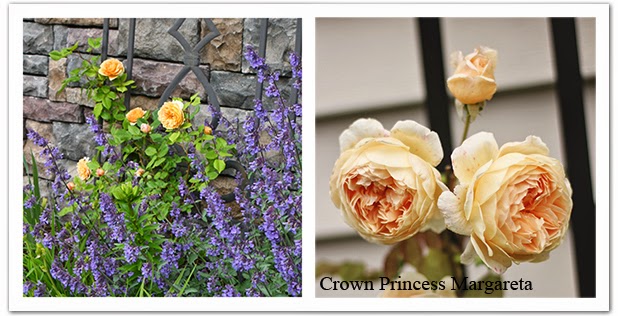 Two 'Crown Princess Margareta' roses are trained as climbers on the west side of my house.  I have struggled to get the sprinkler system set up to give them adequate water, so their growth has been slow so far.  These roses don't seem to mind the intense sun in the afternoon.  Their apricot flowers are lovely and will be on the large side when the plants mature.  As a shrub this rose is expected to grow 5' x 4.5', and as a climber it may reach 9' to 11'. 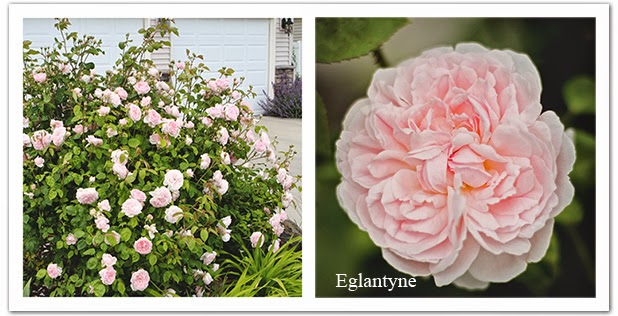 'Eglantyne' is also growing in a grouping of three plants forming one shrub, which is especially nice for this rose since it tends toward more upright growth (4.5' x 3').  Its large flowers are a lovely soft pink and last well in a vase, but the stems are quite prickly.  They have a nice Old Rose scent and a sweet button eye at their center. 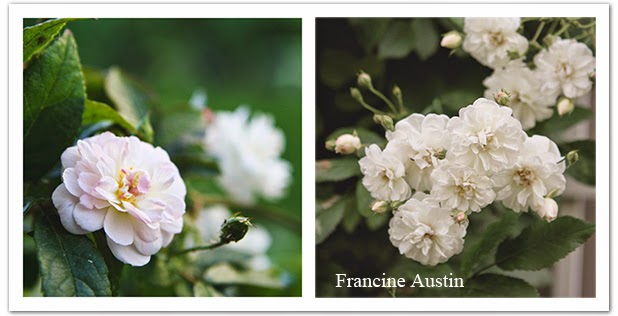 'Francine Austin' produces sprays of sweet miniature roses that add a nice contrasting texture to vases of full-sized roses.  The blooms are almost pure white except in fall, when a blush of pink shows up.  I am growing it as a climber.  This rose is no longer listed in David Austin's catalog, though the rambler 'Snow Goose' looks similar. 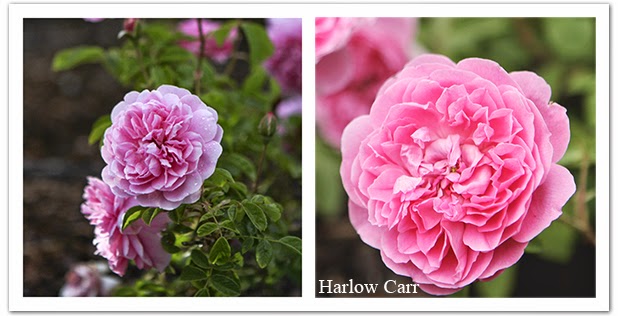 'Harlow Carr' has been transplanted twice since I bought it, so it hasn't had a chance to really settle in and shine.  It repeat flowers very well already and is expected to form a well-rounded shrub at maturity (4' x 3').  The bubblegum pink flowers are medium in size and don't have much fragrance yet, though it may show up when the shrub is mature. 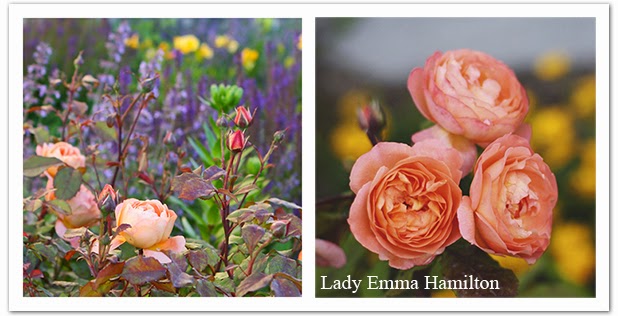 'Lady Emma Hamilton' is tied with 'Abraham Darby' for my favorite fragrance, and its sunset-hued flowers are medium sized and produced in flushes throughout the season.  New leaves are reddish, which makes for an attractive shrub even when not in flower.  David Austin lists its size at 4' x 3', but it stays shorter than that for me. 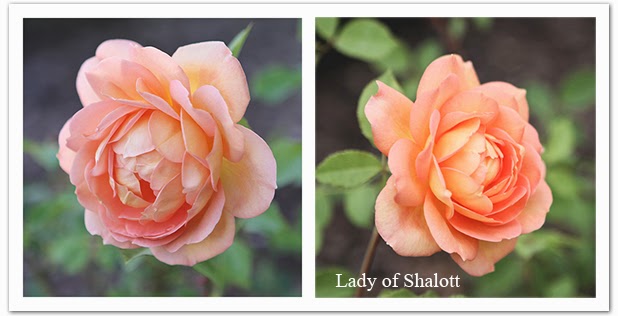 'Lady of Shallot' is fairly new, so I'm still watching to see how the shrub matures.  This rose is recommended as a good one for beginners, since it is supposed to be sturdy and reliable.  The flowers are really lovely and similar in color to 'Lady Emma Hamilton' except a little paler.  The expected size is 4' x 3.5' or 8' as a climber. 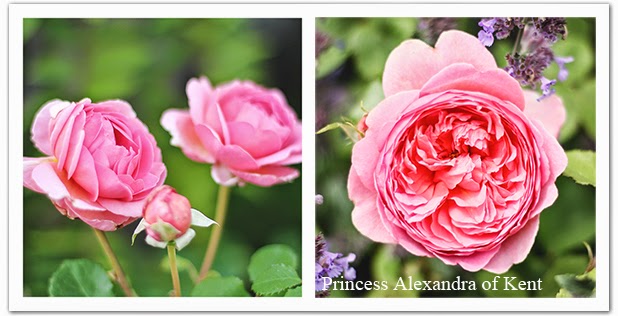 'Princess Alexandra of Kent' has such interesting coloring - the buds are salmon pink, but fully opened flowers age to a cool, pure rose.  The flowers are large and last well in a vase.  I think my conditions are not optimal for fragrance, since this rose won a fragrance award and I haven't noticed much scent.  Expected size is 3.5' x 2.5', so I have two shrubs planted together to make a more rounded shrub. 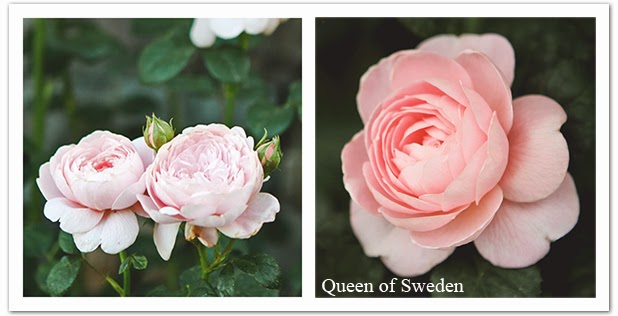 'Queen of Sweden' is a lovely pale apricot-pink rose with medium-sized flowers.  This is the most upright rose I grow - its form looks more like a typical long-stemmed hybrid tea than my other English roses.  The fragrance is myrrh and moderately strong, and there are few thorns, so it's a nice rose for cutting.  The catalog lists the size at 4' x 2.5', but in the fall my shrub has sent up stems that are taller than I am.  I just keep pruning it down to a normal level. 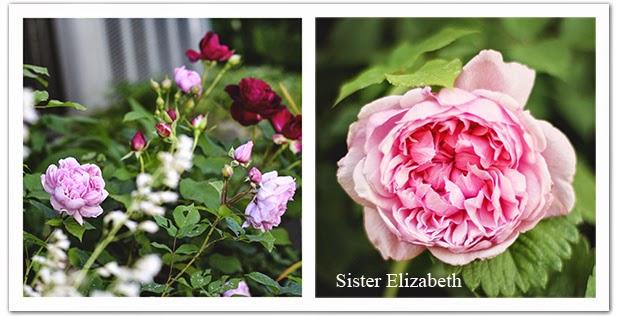 'Sister Elizabeth' also has a myrrh fragrance, and its smallish flowers are a cool mauve-pink.  I love the petal arrangement with a button eye at center.  This is my smallest English rose, staying about 2.5' x 2.5'.  It isn't the best cutting flower, but sometimes the blooms last for a few days in a vase. 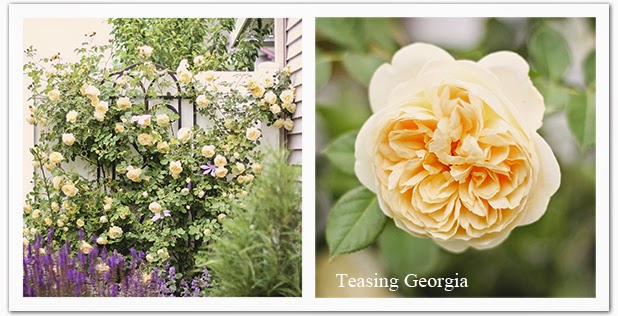 'Teasing Georgia' is growing as a climber in the west garden, and it was magnificent last year when covered with medium-sized yellow blooms.  I haven't noticed much fragrance, though the catalog says it won a fragrance award.  It grows 4' x 3.5' as a shrub and 8'-10' as a climber. 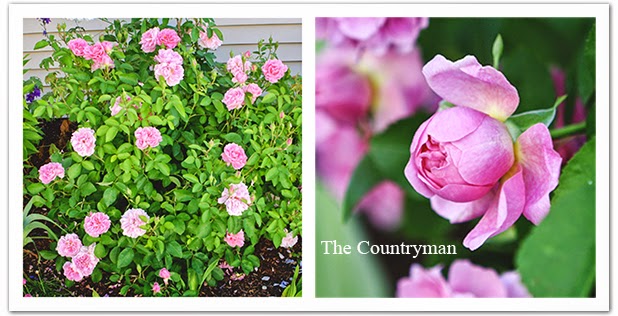 'The Countryman' was the first English rose I purchased, as it was reported to be one of David Austin's favorite roses.  This rose grows into a nicely rounded, low shrub at 3' x 3.5'.  The fragrance is delectable, described as Old Rose with a hint of strawberries.  I haven't had good luck with this one in a vase, and the stems are remarkably prickly, but the deep pink flowers remind me of cupcakes and are completely delicious in the garden. 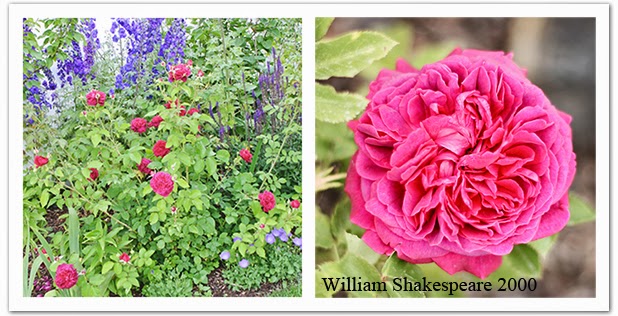 'William Shakespeare 2000' is the most romantic rose I grow with its deep crimson shade.  David Austin now recommends other crimson roses ('Darcey Bussell', 'Munstead Wood' or new 'Heathcliff'), but the form of WS's flowers is the most exquisite I've seen - flat and intricately folded when fully open.

I'm looking forward to seeing more blooms on 'Gertrude Jekyll' this year and catching some good shots to add here.  I have ordered 'Royal Jubilee' and 'Young Lycidas' for planting this spring and will add photos of them as well when bloom season begins.  I grew 'Munstead Wood' for a while, but its color was too dark for any of my color schemes, so I gave it away.  I gave up on 'Litchfield Angel' after it died back to the ground one winter.  These other roses have come through zone 5 winters just fine.