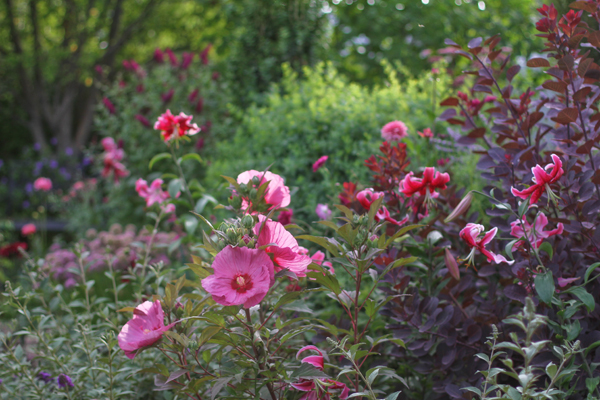 The Northwest corner of the garden has been colorful in August with perennial 'Berry Awesome' hardy hibiscus blooming for the first time along with 'Lavern Friemann' (aka Miss Freya) Orienpet lilies standing out against the 'Royal Purple' smoke bush at right. 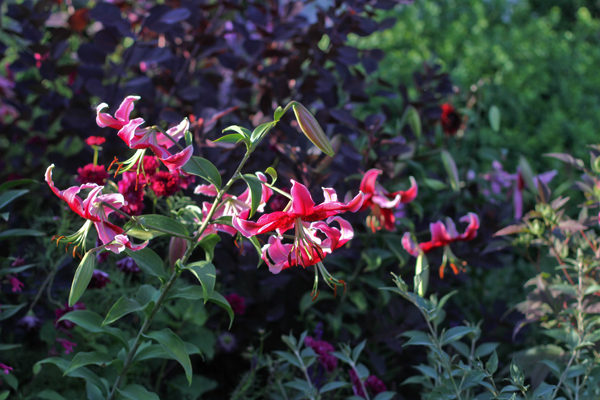 The lilies are sturdy, tall and sweetly fragrant.  If the breeze is right, we can catch their scent on the patio.  I am a big fan of the Orienpet hybrids.  They are much more vigorous in my garden than the Oriental lilies I've planted over the years. 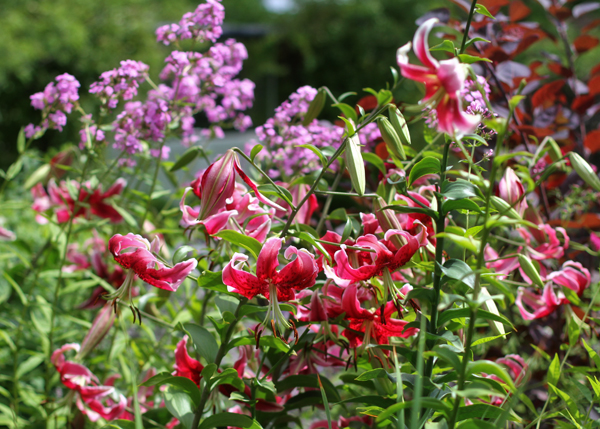 On the back side of the bed the lilies mingle with tall 'Jeana' phlox and Russian sage (yet to bloom in this shot). 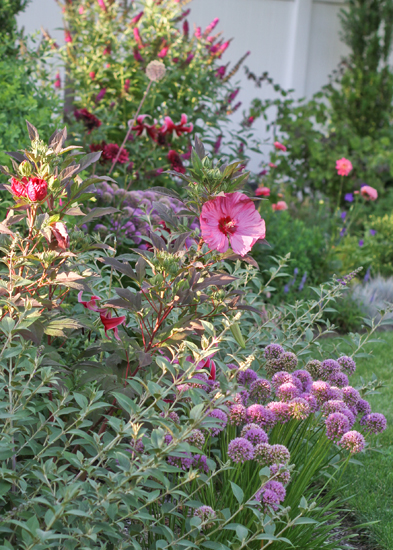 'Berry Awesome' hibiscus deserves another picture.  Each flower lasts only two days before it wilts and needs to be deadheaded.  But the flowers are so large that each one makes a big impact.  The mauve-green foliage was pretty all season even before the flowers appeared. 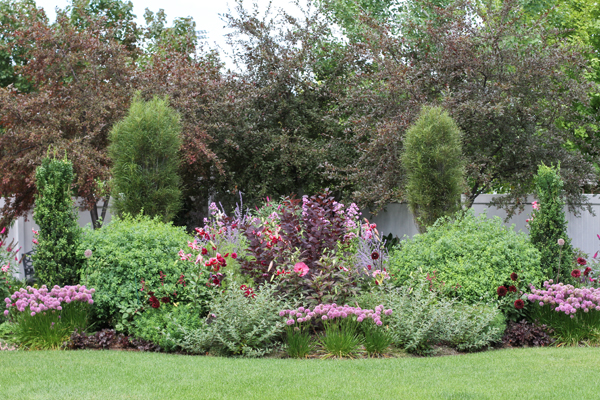 Here is the view of the whole Northwest corner bed in August, with 'Millennium' allium in full bloom in front. 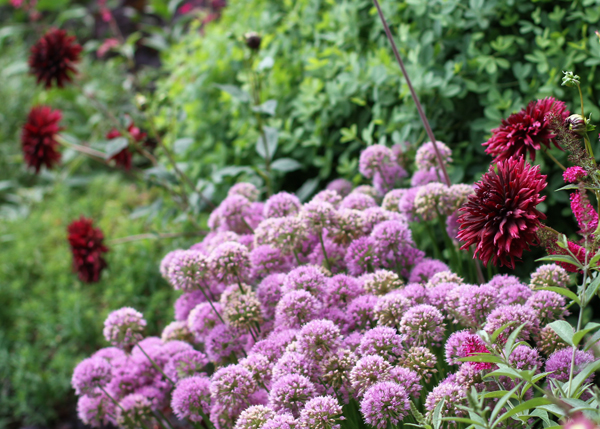 The mauve allium looks nice with maroon 'Rip City' dahlias planted nearby.  On warm afternoons, this allium was covered with pollinators.  Absolutely swarming.  So don't plant it next to a walkway where you might be stung if you brush against a honeybee. 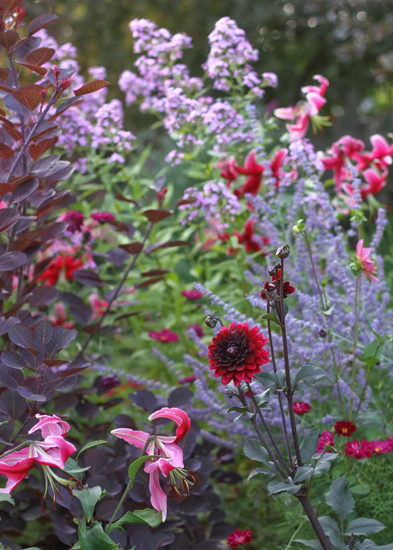 Only one of my 'Karma Choc' dahlia tubers made it through the winter in storage, but its flowers echo 'Rip City' and work well with the color scheme in this area. 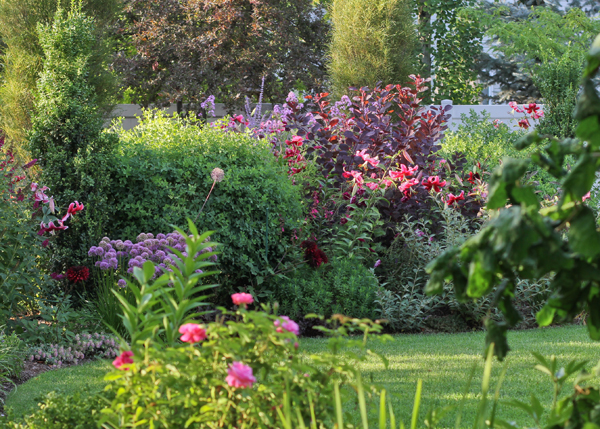 I can't resist sharing another view of this corner in the late afternoon light.  This is the best bloom year so far for the area. 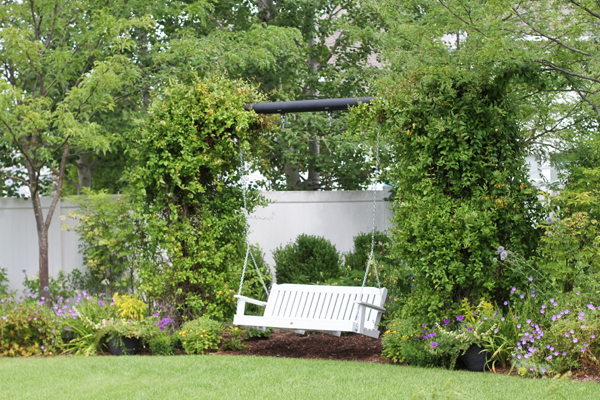 One peek at the Northeast corner reveals that the honeysuckle still hasn't grown all the way across the swing set frame.  Maybe next year (I've been saying that for years).
This summer we've been fighting against a huge outbreak of root weevils.  Unfortunately I didn't realize what was causing the notching on plant leaves until the root weevil population exploded.  Systemic neonicotinoid pesticides would do the best job of killing the pests, which chew on leaves in their adult form and chew on roots as larvae, but bees and other pollinators are also harmed by that type of pesticide.  So we've sprayed Neem oil several times.  It seems to have slowed the root weevils but not completely wiped them out.  I'm hoping to get spraying earlier next year, in the few weeks after the adults appear but before they start laying eggs.  And the neighbor's aspen roots keep sending big shoots into our garden, so we keep pulling them up.  Thrips continue to abound.  There is always a battle to be fought in the garden, but we enjoy the results so much that it's worth it.
No comments: 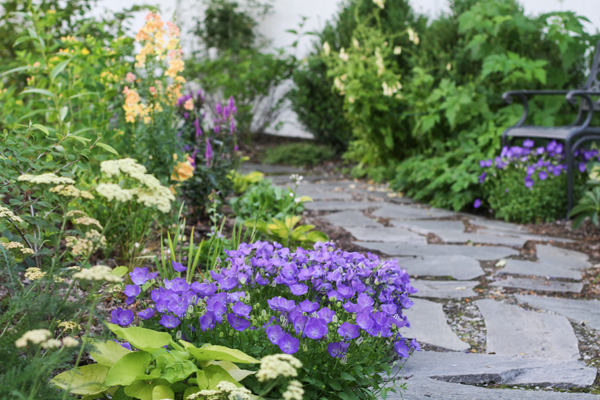 I am late in posting these photos from July, but there were some pretty areas last month.  Above is the space behind the swing set with chartreuse leaves of 'Diane's Gold' brunnera, lavender flowers on short 'Pearl Deep Blue' campanula, 'Peachy Seduction' yarrow, purple-pink spikes of 'Very Van Gogh' veronica, 'Chantilly Peach' snapdragons, and 'Magical Desire' hypericum berries toward the back along with the last of the butter yellow Digitalis grandiflora foxglove blooms.

A few weeks later the 'Deep Pearl Blue' campanula was mostly done blooming but I had planted more upright 'Beyond Blue' campanula next to the snapdragons.  The snapdragons will keep blooming throughout the growing season, although they get rangy and fall over and have to be trimmed occasionally. 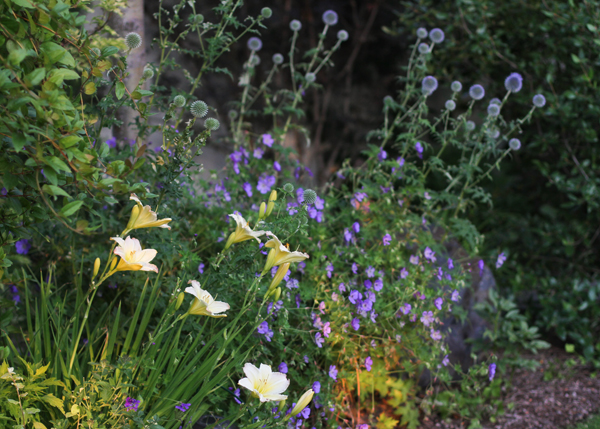 Along the front of the swing set, 'Big Smile' daylilies did their thing with 'Rozanne' hardy geranium and 'Ritro' echinops (globe thistle) at back.  The thistle plants do look weedy, I suppose, but they grow well despite partial shade and competition from tree roots, and the interesting ball flowers stick around for a long time.  They will reseed like crazy if I don't deadhead in time. 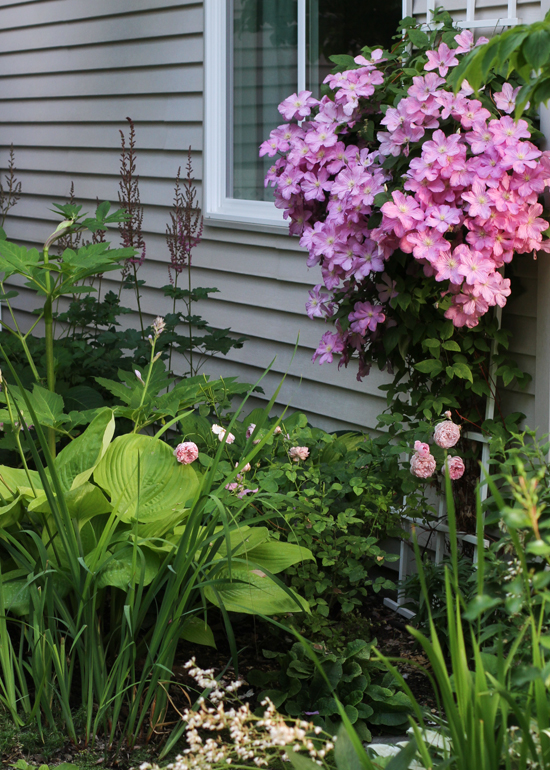 On the east side of the house, 'Comtesse de Bouchard' clematis bloomed with a matching 'Charles Rennie Mackintosh' rose and bud spikes of 'Purple Candles' astilbe. 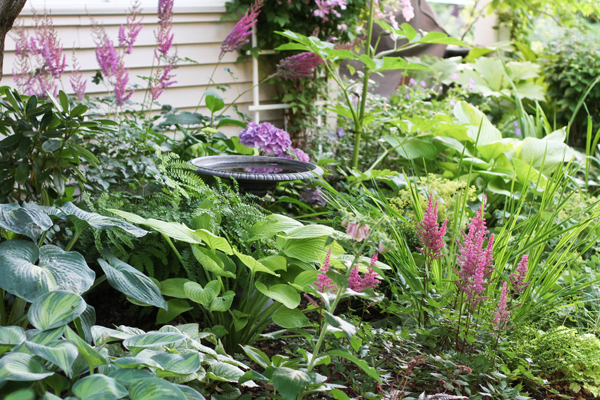 A week later the tall PC astilbes at back were in full bloom with 'Maggie Daley' astilbes in front and 'Cape Cod' hydrangea blooms right behind the bird bath.  I have a hard time getting mophead hydrangeas to bloom, so I was excited to see flowers on this second year plant. 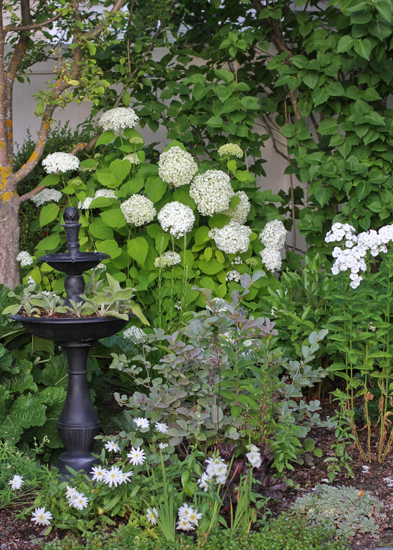 The white garden has been less than inspiring lately.  'Ester Reed' daisies at front are always floppy.  The 'Annabelle' hydrangea bloomed well but other plants haven't made much of an impact.  The white 'David' phlox at right has bloomed for a long time, but the single plant looked lonely.  I need to divide it and replant several clumps throughout the bed. 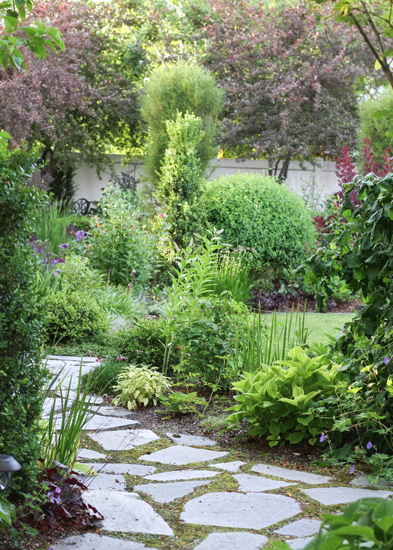 One evening the view of the backyard from the gate featured shades of green and maroon that I liked even without flowers. 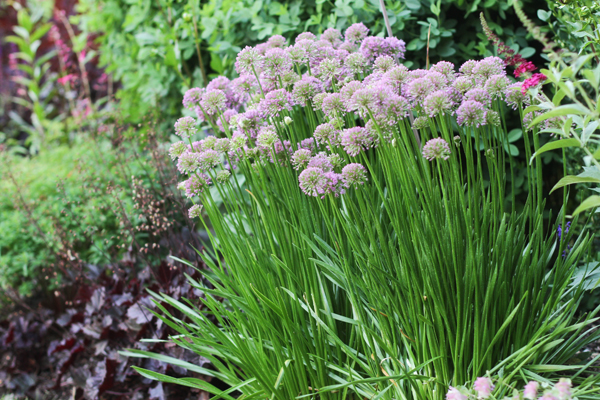 Here are 'Millenium' allium plants just starting their long bloom time.  As they opened the mauve color became more intense (I'll share more pictures in the next post).  This plant is definitely a winner.  It leafs out early, grows vigorously, shrugs off pests, and the fountain shape looks great at the front of the garden.  It's rated as deer resistant, but pollinators love it.  I mean they really love it - on warm afternoons there are dozens of honeybees, butterflies and other little pollinators swarming on the flowers.  You might not want to plant it right next to a walkway so no one gets stung as they brush by. 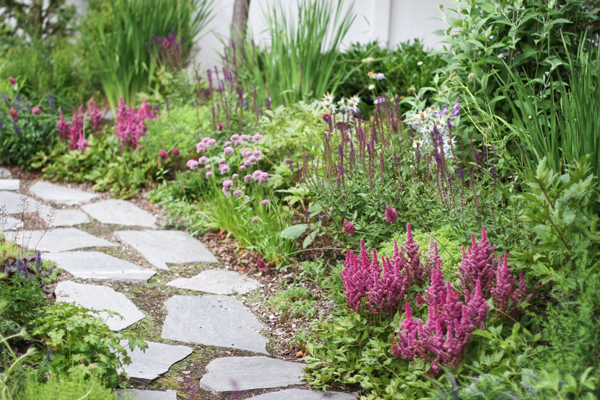 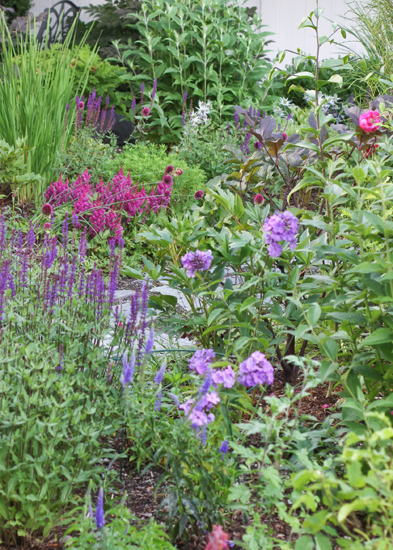 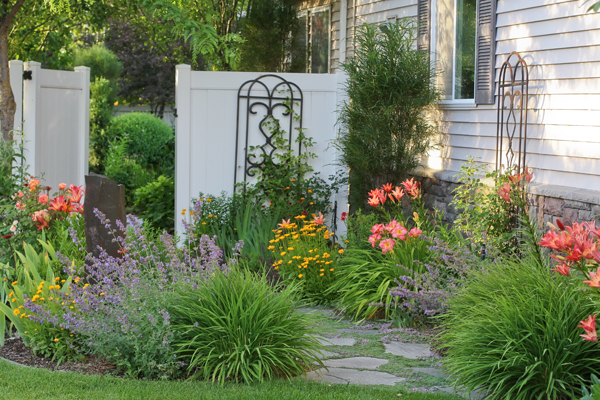