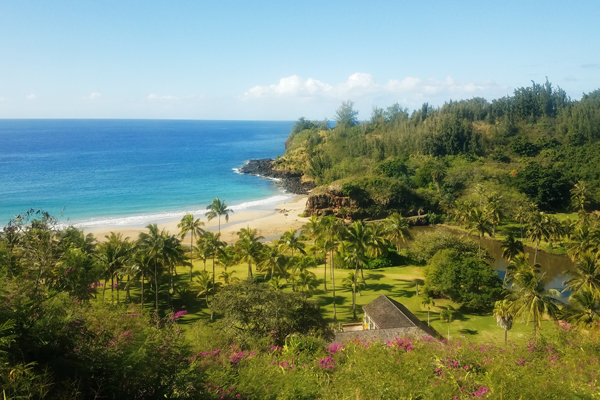 My garden is buried under two feet of snow right now (at the end of February?!), so my husband and I especially appreciated a sunny escape to Kauai earlier this month.  A highlight for me was our tour of the Allerton Garden, created by Robert Allerton and John Gregg beginning in 1938. Above is their beach house as seen from the tour bus window on the drive into the garden. 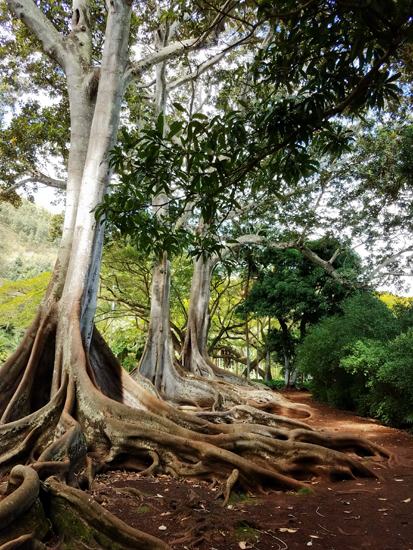 This 83-acre garden was named one of Nation Geographic Traveler's "50 Places of a Lifetime in America," and it was truly stunning.  Above are the Morton Bay fig trees featured in the movie Jurassic Park.  Our tour guide said that Steven Spielberg kept filming as Hurricane Iniki approached the island (in 1992), so the storm scenes in the movie were very real.  After the film became such a success, Spielberg gave generous bonuses to the camera crew who kept working in dangerous conditions.  Iniki was the largest hurricane to hit Hawaii in recorded history, and the destruction it caused kept Allerton Garden closed for three years afterward. 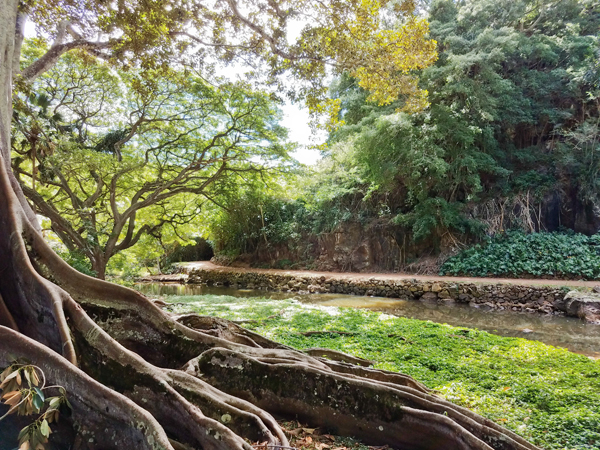 I was amazed at the beautiful scenes in nearly every direction.  Even though I only had my less-than-stellar cell phone camera with me, I enjoyed snapping shots along with the rest of our tour group.  This garden is only open for guided tours, which were not inexpensive.  My husband kept joking about writing a book entitled "Kauai on $400 a Day." 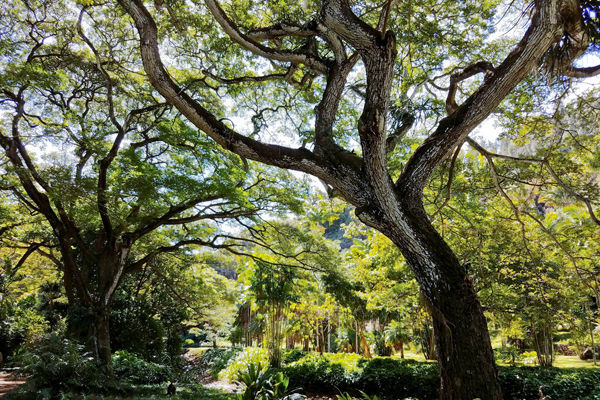 Even the less famous giant trees were majestic.  A full time team of seven gardeners cares for the garden. 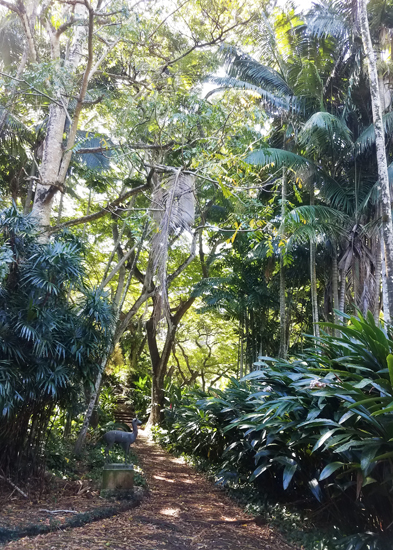 This garden is quite different than the English cottage gardens I love so much, but I fell in love with it.  What a beautiful gift the Allertons gave to us by choosing to share their creation with the public after their deaths. 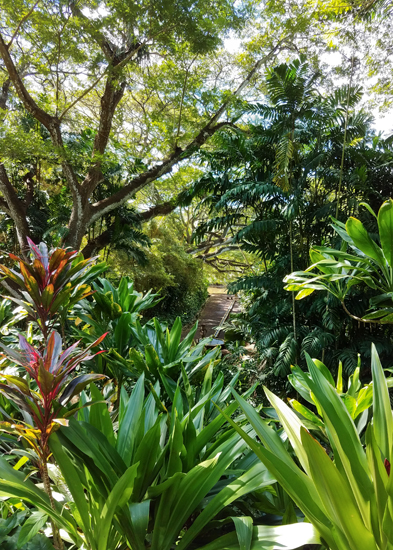 It was fascinating to see giant versions of many plants I have grown indoors in pots. 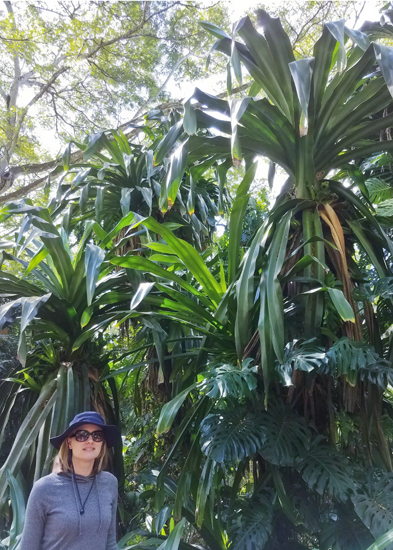 Here's a photo of me with some of these monster-sized houseplants for perspective. 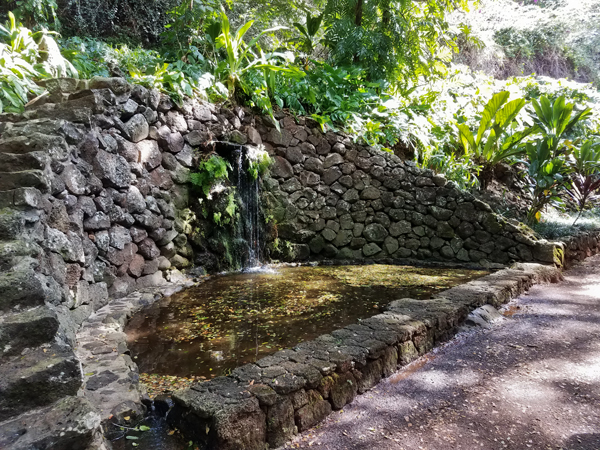 The use of water in the garden was extensive.  A spring was channeled through many stone waterfalls and pools. 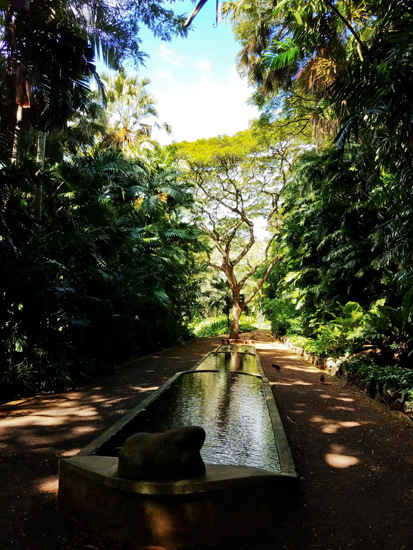 Here is one of the pools with feral chickens sauntering nearby.  Hurricane Iniki set chickens free on the island and they proliferated in the following years.  We also saw them around the hotel pool, on beaches, in parks and in parking lots.  Lots of roosters.  Lots of crowing all day long, but I found it amusing instead of annoying. The Mermaid Room featured this pool that was shaped with undulating sides that cause the water to pulse out the lower end. 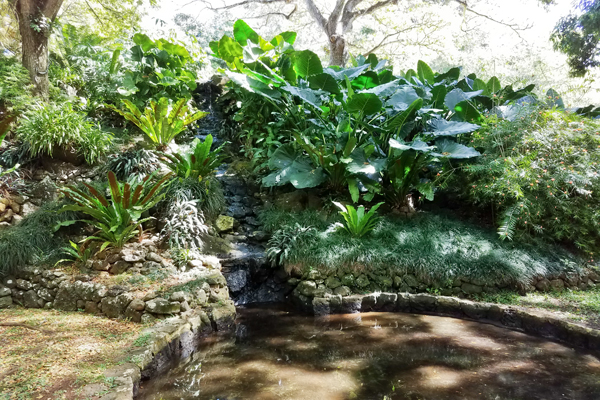 Another waterfall and pool.  In my garden I would be rather proud of myself if I created just one scene like this, and Allerton Garden had so many. Giant bamboo arched over these steps.  If I had to pick one word to describe the gardens, it might be giant.  Or breathtaking.  Or gorgeous.  The tour was a lovely experience and well worth the time and money.
1 comment: