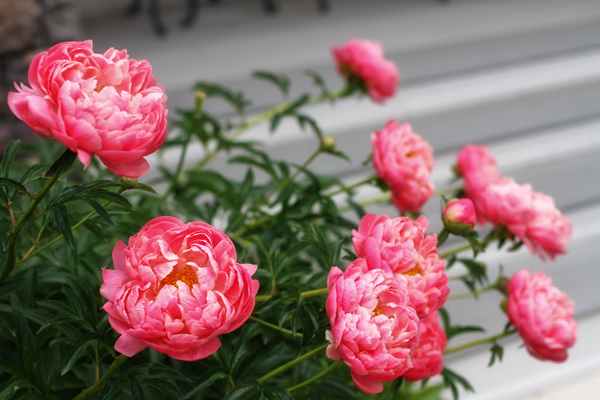 The June flowers are blooming in May this year, and my'Coral Supreme' peonies (above) out front have been very showy for the past couple of weeks.  I didn't capture the color very well in these shots; it really is coral instead of pure pink. 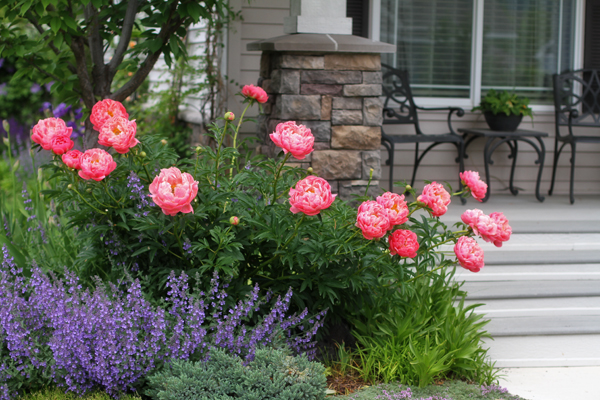 This type of peony is not supposed to need staking, but my plants grew so tall and the flowers so large that I finally put a ring around them.  Obviously I should have put the ring around this one earlier to hold it into a more upright shape.  Next year I'll know. 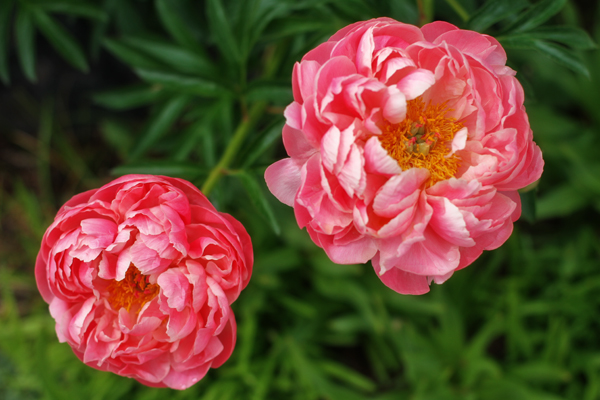 Most of the flowers reached nearly eight inches across.  I cut several for vases, but the ones I cut in bud didn't open very well, and the ones I cut when open didn't last very long before turning brown.  I think the rose or bomb form peonies last better in vases than these lotus form flowers.  They sure were pretty in arrangements for a couple of days, though. 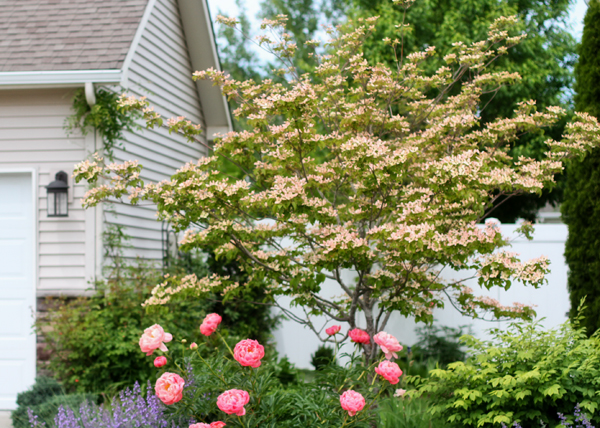 My  two 'Heartthrob' Korean dogwoods (Cornus kousa) have bloomed better this spring than ever before.  They were fairly large when I planted them, so it has taken several years for their roots to catch up after transplanting.  Maybe this summer they'll finally put on some top growth and keep blooming hard each spring. 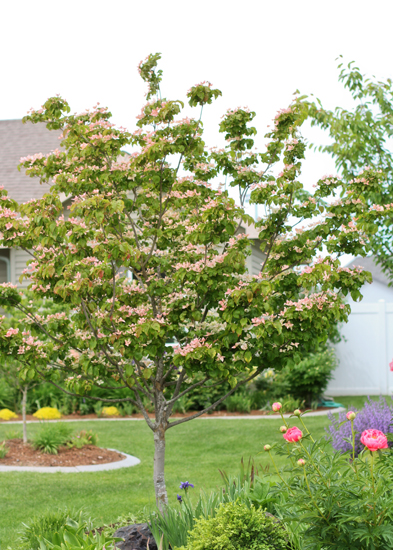 Here is the second tree.  It's hard to get good shots of these trees, as this one is next to the neighborhood's large bank of mailboxes and the other one is next to utility boxes.  These Korean dogwoods start blooming as the Cornus florida dogwoods finish up, and the flowers (actually colorful bracts) last for several weeks. 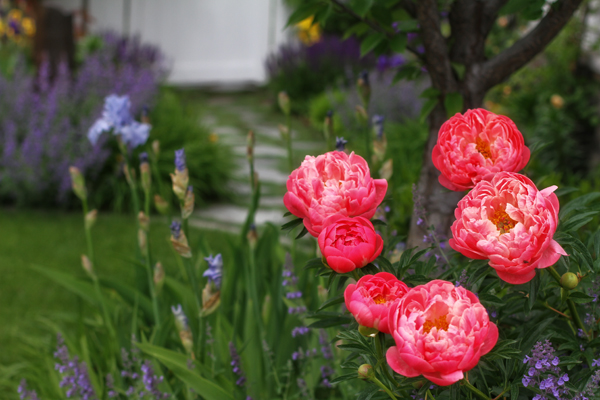 If we walk around the southwest corner of the house to the west garden, the peonies give way to bearded iris, catmint and salvia. 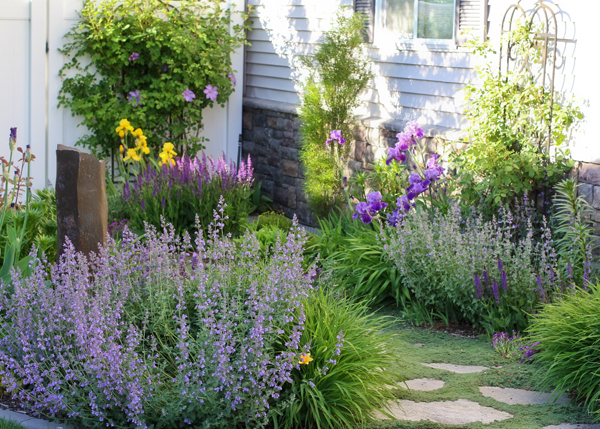 I meant to beg my dear hubby to divide the woody catmints this spring but forgot, and now they're all flopping with big holes in the center.  That hasn't stopped the fuzzy bumblebees, hummingbirds and cabbage white butterflies from frequenting the blooms. 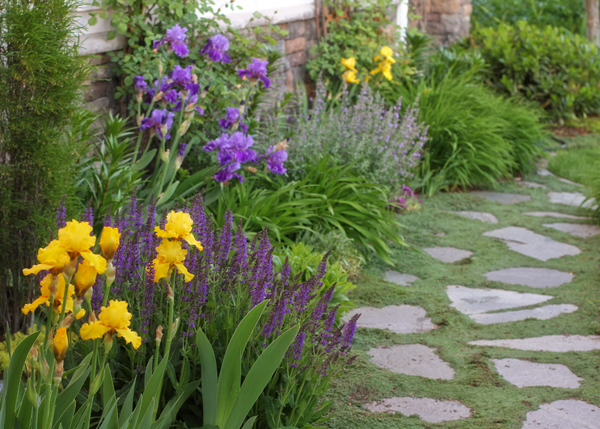 This last shot features both 'Pure as Gold' and 'Evening Tidings' iris, plus 'May Night' sage (Salvia) and 'Walker's Low' catmint.  I'm continuing to collect shots from the backyard gardens to share next week.
3 comments: 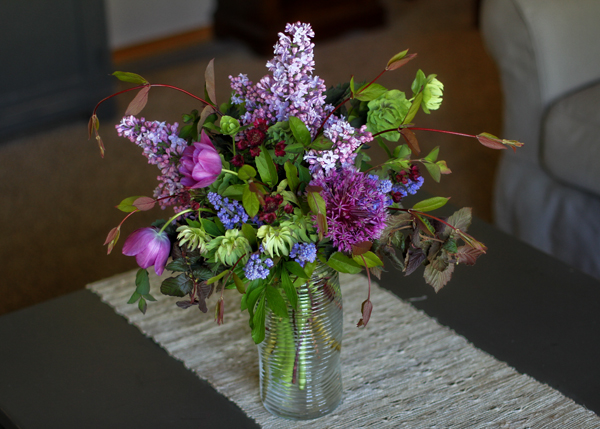 We usually imagine spring floral arrangements in pastel shades, but there are more dramatic colors available.  The arrangement above features purple 'Negrita' tulips, an 'Early Emperor' allium, and lighter violet 'Katherine Havemeyer' lilacs.  Last summer I put some phosphate fertilizer around my lilacs and this year they bloomed heavier than ever before, so I've had plenty to pick. 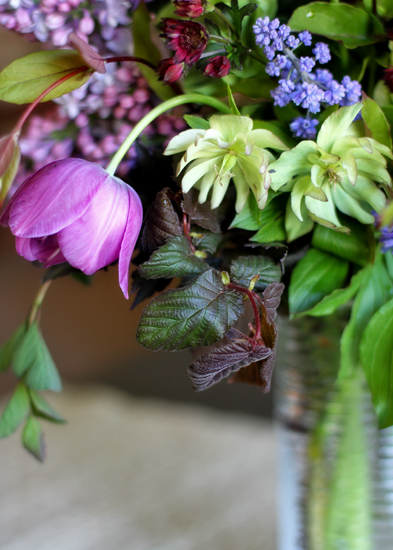 Various types of greenery - or maroonery, in the case of the 'Red Dragon' contorted filbert foliage above - are important supporting players in this garden arrangement.  I also used peony leaves to made a grid to hold stems, plus stems of coral-shaded snowberry and honeysuckle to add interesting lines. 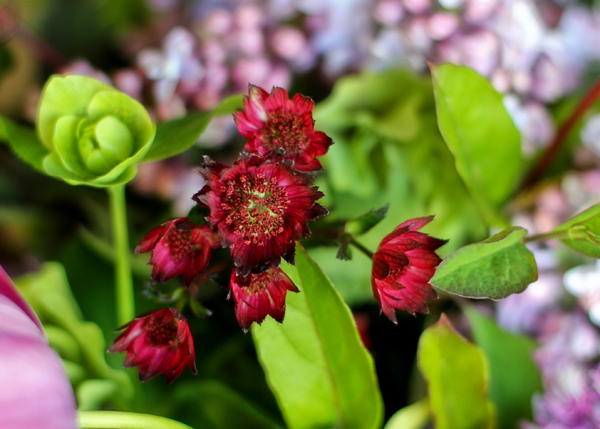 'Moulin Rouge' astrantia is fabulous in the garden or the vase.  I grow seven types of astrantia and this one is the darkest and the earliest to bloom by several weeks.  In this shot you also see one of the last of the 'Double Queen' hellebore blooms for the spring. 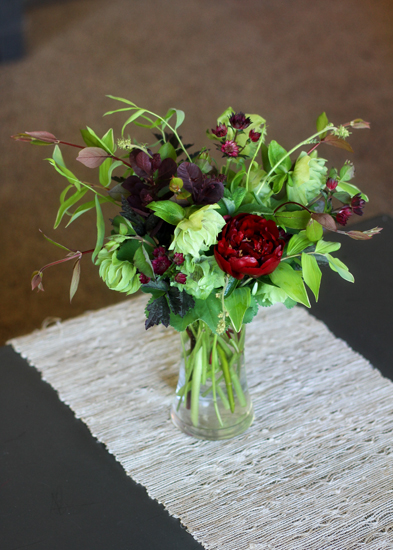 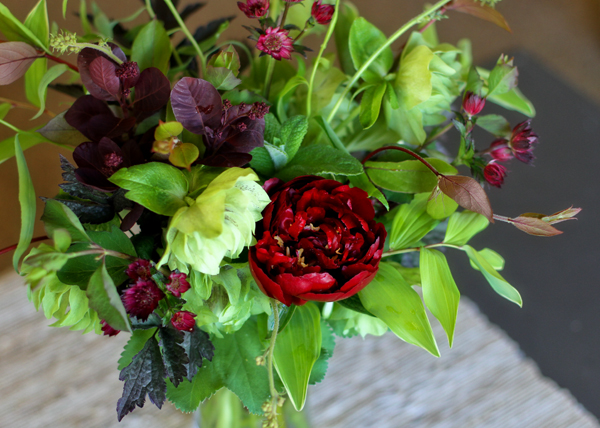 The green shades come from variegated Solomon's seal, snowberry, apple mint, curly willow, hellebore and arching stems of 'June Bride' heuchera.  I find that hellebore stems collapse if I cut them right after they start blooming, but if I wait a month or so they hold up just fine in vases. 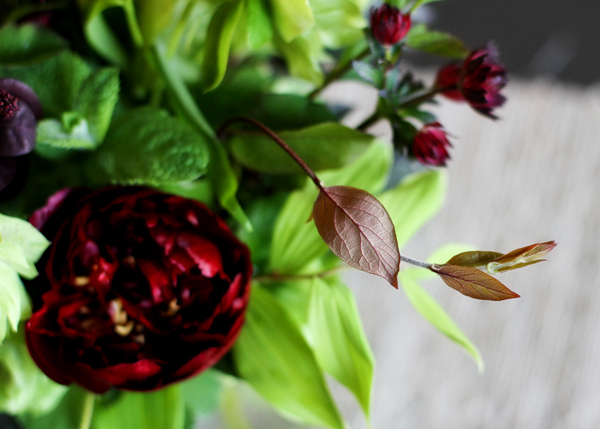 Have I gushed about honeysuckle stems lately?  Some types of honeysuckle are invasive in some areas and other types are rampant growers unsuitable for small yards, but there are many other types available now.  Search Monrovia's catalog for 'honeysuckle' to see a great selection.  These twisting, arching stems end up in almost every arrangement I make.  They add a beautiful wild touch and I highly recommend them for cutting gardens. 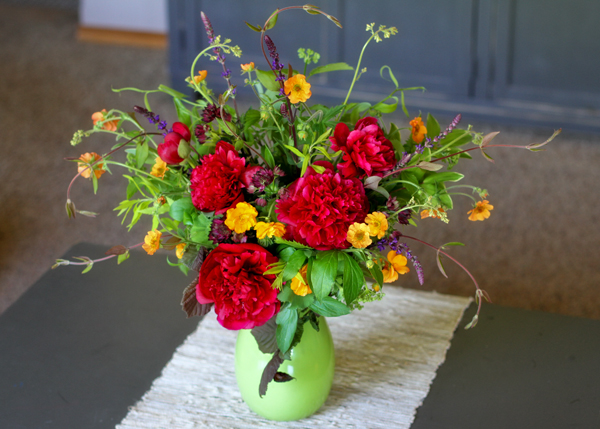 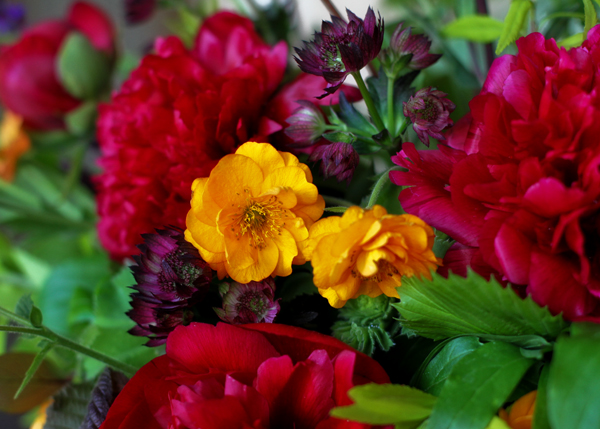 I'm embracing orange thanks to two types of geum.  Above is double-flowered 'Firestorm,' and I also used 'Totally Tangerine' geum in this vase.  Both types are vigorous, early bloomers that look especially good against other jewel tones.
In the next couple of weeks the garden will explode with color.  The main peony flush looks to peak at the same time as my English roses, and countless other perennials are in bud right now.  Of course this means there will be plenty of deadheading to do eventually, but my kids are helpful with that since I pay them a penny per deadheaded flower.  Yup, I'm a big spender!
3 comments: 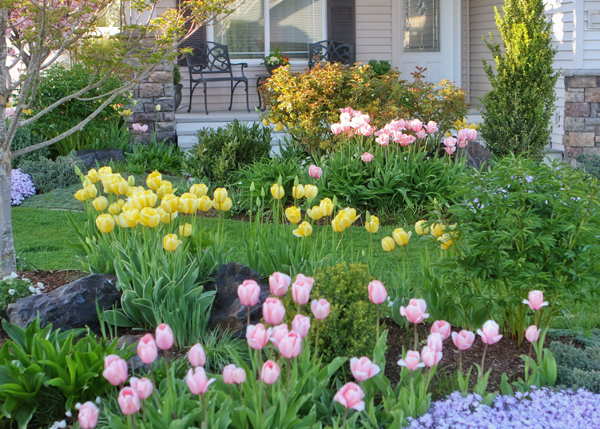 Several years ago I planted a few dozen tulips in the front yard.  Tulips don't always bloom well for many years, and they don't always multiply.  But pink 'Salmon Impression' and yellow 'Jaap Groot' have done both, and this spring they produced hundreds of blooms. 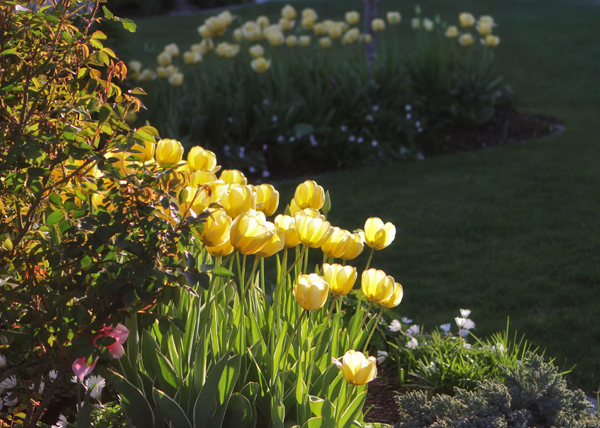 Tulips prefer well drained soil as the bulbs rot when they are kept wet in summer.  I guess that's the secret to the success of the tulips in my front yard, as the imported soil in the raised beds drains quickly. 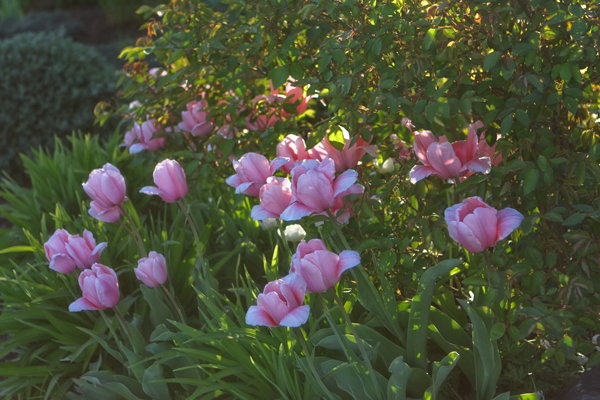 The tulips didn't bloom very long this year since temperatures have been much warmer than usual.  The ones above are nearly ready to start dropping petals.  But the peonies and roses have buds ready to open any day now, so there won't be much of a break between the spring bulbs and the 'June' flowers that are actually going to bloom in May this year. 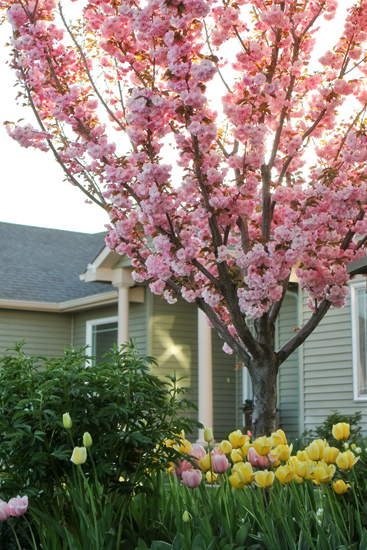 I was especially excited to see the first good bloom on my 'Kwanzan' flowering cherry tree.  This tree was planted perhaps five years ago, but it's never produced more than a handful of blooms.  I worried that maybe it just wasn't a bloomer.  But this year it exploded in a cloud of pink.  I think lack of maturity and spring frosts caused the lack of bloom in past years. 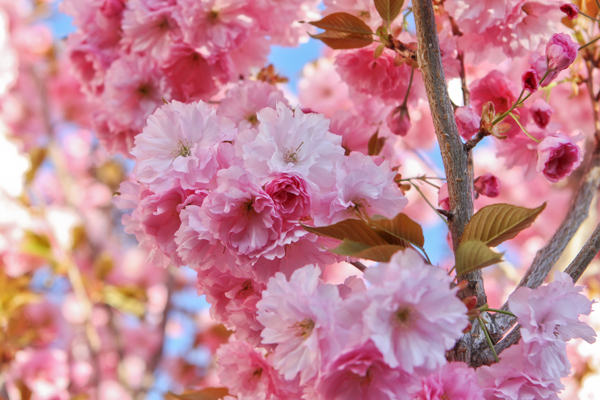 'Kwanzan' has double blossoms (extra petals) that look especially fluffy and full.  Lately it seems that many sophisticated gardeners prefer single flowers, but I'm still a sucker for the double ones. 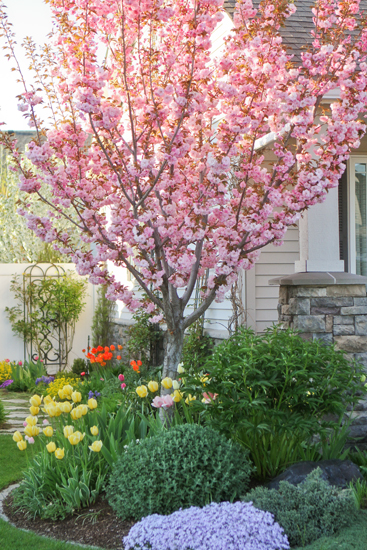 I couldn't resist one more shot of this happy tree from last week.  By today most of the petals have dropped as pink 'snow.'  The lavender flowers at the bottom are 'Emerald Blue' creeping phlox (P. subulata). 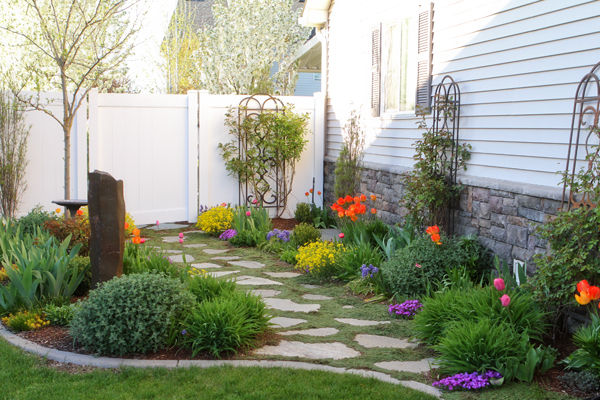