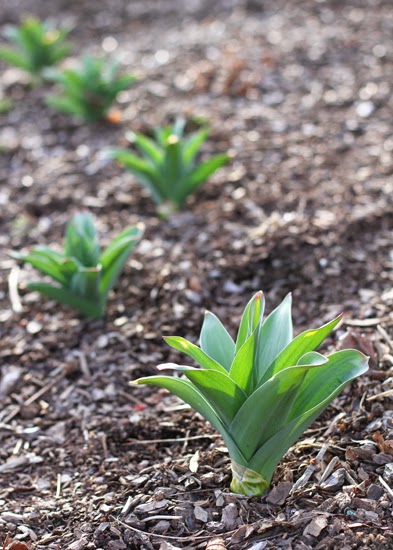 Rosettes of globe allium leaves are brightening the garden despite regular frosts at night.  Above are 'Ambassador' leaves, which have a nice structural form.  These were planted last fall, so I am especially excited to see the blooms for the first time.  They are supposed to be a deeper purple and a little later to bloom than other globe alliums. 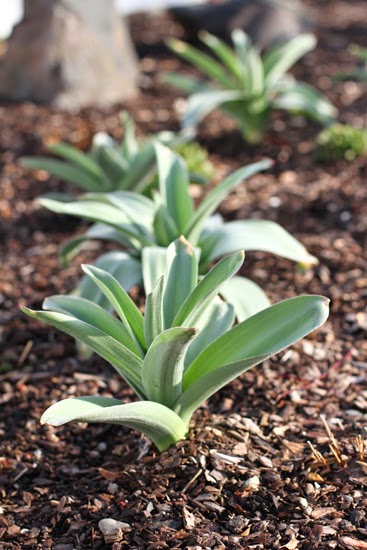 Here is the same corner of the garden a few days later when the leaves were frosty in the morning light.  By the time these alliums bloom in late May or early June, the leaves will have withered away.  I have the bulbs planted among perennial 'Caradonna' Salvia, which will provide a base for the tall stems with 7" flower globes atop. 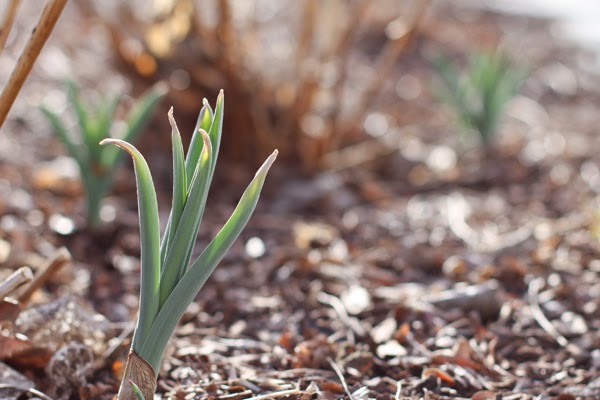 'Early Emporer' globe alliums are another new addition to the garden this year.  The leaves aren't as pretty as some, but they are supposed to bloom a week or two earlier than the other types.  I have them planted among late-to-awaken hydrangeas.  It will be nice to have something green in this area while the hydrangeas still look like dead sticks for the next month or so. 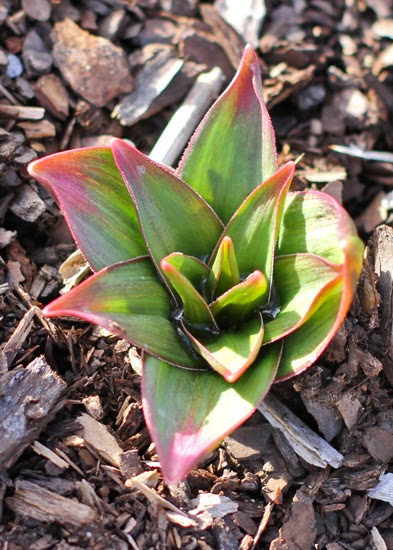 'Globemaster' allium leaves make a substantial rosette, and they offer lovely red shading on the tips when they first emerge.  I didn't catch photos of the emerging 'Ambassador' leaves, but they were especially pretty with purple tips a few weeks ago. 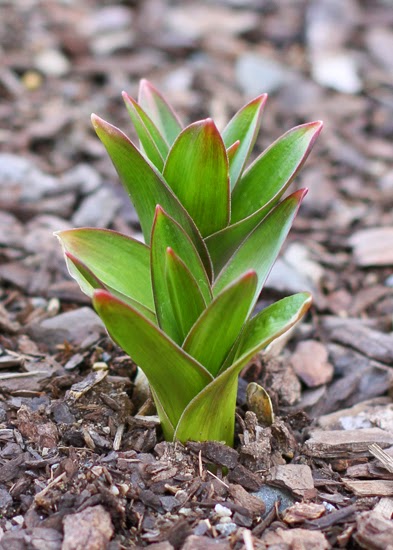 Here is a 'Globemaster' that was planted a year and a half ago and has already split into two plants.  'Globemaster' really is the best globe allium that I've seen, as its huge flower heads last longer than the others and the stems are especially sturdy.  These leaves will make a nice display as they continue to grow long and strappy, and though they linger longer than other allium species, they will start to wither as the flowers bloom. In the lower left corner of the photo above you can see 'Gladiator' allium leaves, with crocus leaves on the right and daylily shoots at the rear.  The croci in this partly shady spot aren't even blooming yet, and the allium leaves are already well emerged.  I suppose it would be nice if allium leaves stuck around for the blooming period, but it's also very nice to have such early green in the garden.  The daylily leaves will be the base of this tall allium-which has already split into three for its second spring-when it blooms in May.  Last year my 'Gladiator' alliums reached nearly five feet tall! 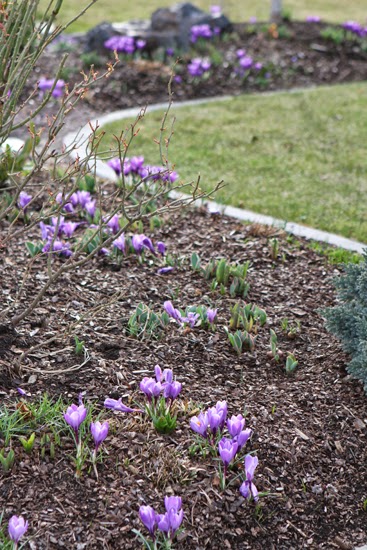 Meanwhile the 'Grand Maitre' croci in the front yard are finishing up their big burst of bloom.  Just a few mini 'Tete-a-Tete' daffodils are blooming, and I don't know if the others are late to awaken or if they are not coming back this year.  White windflowers (Anemone blanda 'Alba') are starting to open with little daisy-like flowers, and blue 'Spring Beauty' scilla are beginning to bloom as well.  Tulip leaves are still small as you see above, but the tiny pink Tulipa humilis bulbs in the backyard are beginning to open now.  Spring marches on!
3 comments: 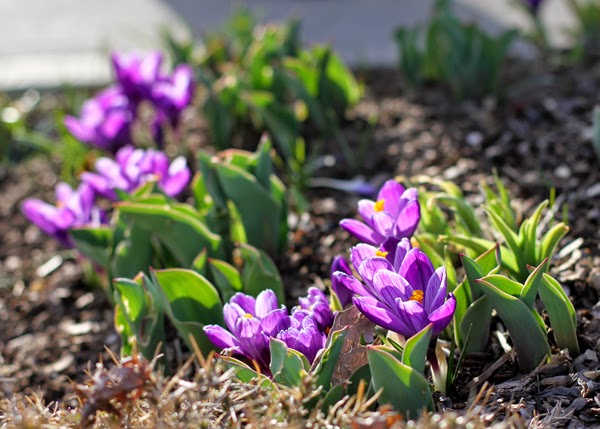 A smattering of purple Croci are blooming across the front yard flower beds right now.  I looked it up, and the plural of crocus can be croci or crocuses.  But by whatever name, finally, flowers again! 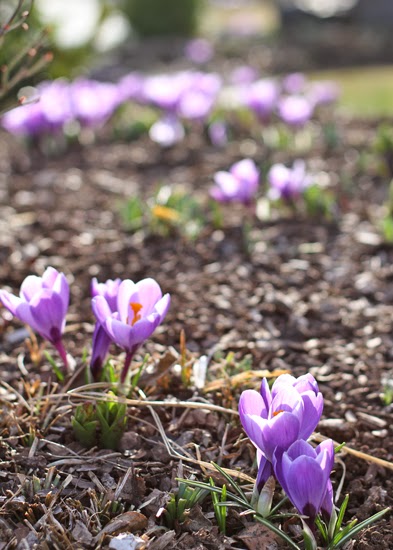 ﻿
These 'Grande Maitre' Crocus blooms look more purple or violet depending on the lighting.  After several years of multiplying, plus a few more planted here and there in fall, there are quite a few cheerful clusters. 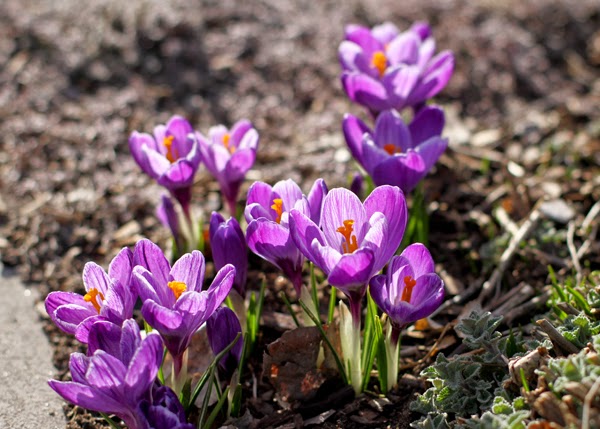 After months of feeling hungry for sunlight and vibrant color, it feels great to enjoy both each time I walk out front to get the mail.  This winter was fairly mild, but even mild winters are very dark for us this far north. 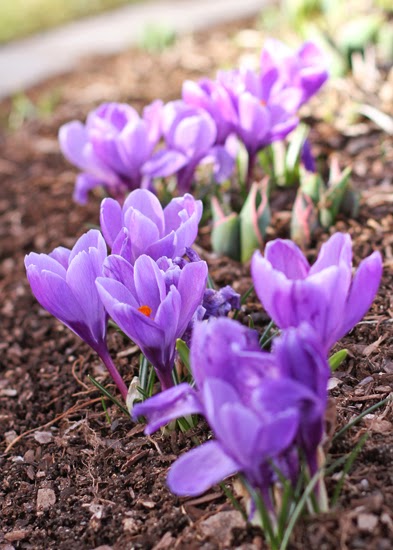 ﻿
I have been working away at the spring garden chores, including pruning all the roses and crabapple trees.  Crabs require an awful lot of pruning to promote a nice form, which sometimes makes me wish I had planted more easy dogwoods instead.  But they're planted now and so they're staying.  Probably. 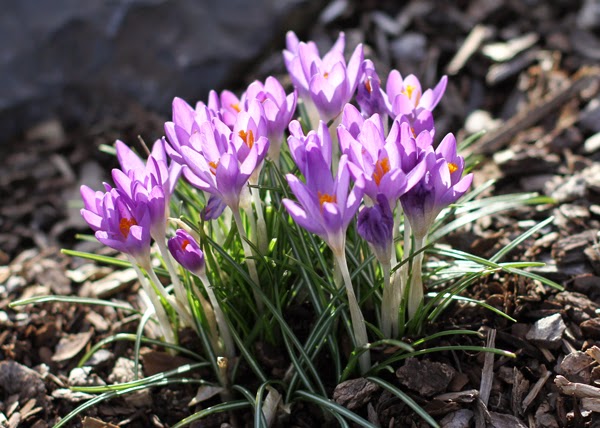 I'm hoping to get some compost spread this weekend with the help of my dear hubby, and then the garden will be completely ready for spring.  Of course we'll be careful not to bury any of these sweet little clusters of 'Barr's Purple' Crocus tommasinianus (a.k.a. tommies, above), which are growing in the front yard along with larger and deeper 'Grand Maitre'. 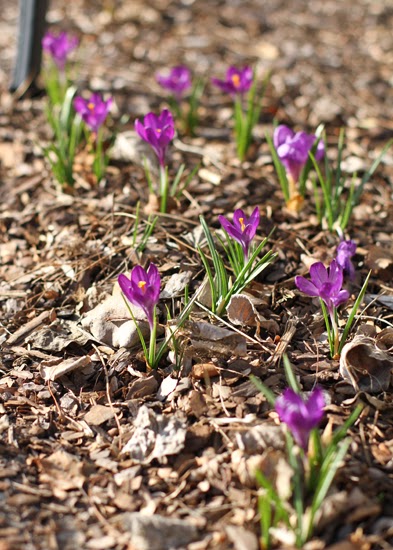 The 'Ruby Giant' tommies that I planted last fall in the backyard are blooming now as well.  By next year they will be clusters instead of single blooms.  With so many things in life depreciating from year to year--like the face of a gardener who spends too much time in the sun--it's especially nice to grow a garden that just keeps getting better.
3 comments: 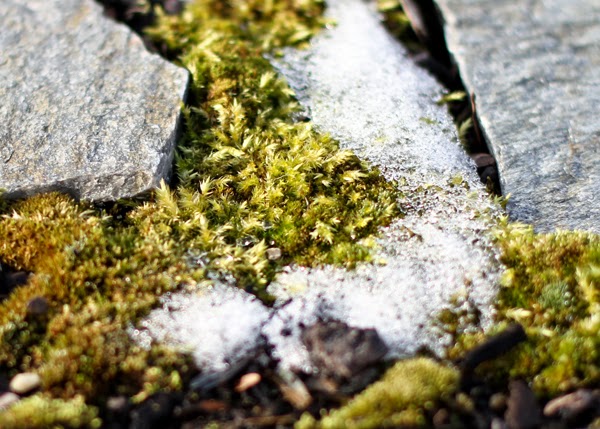 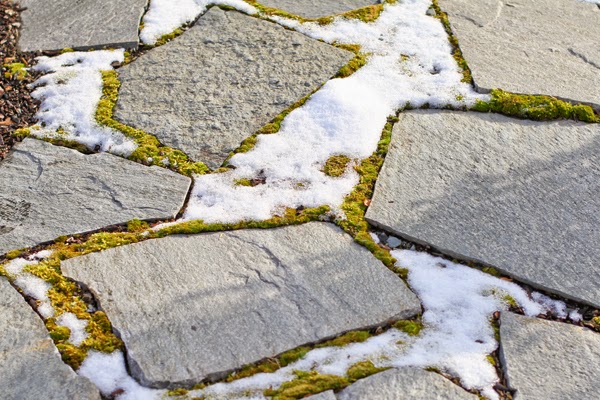 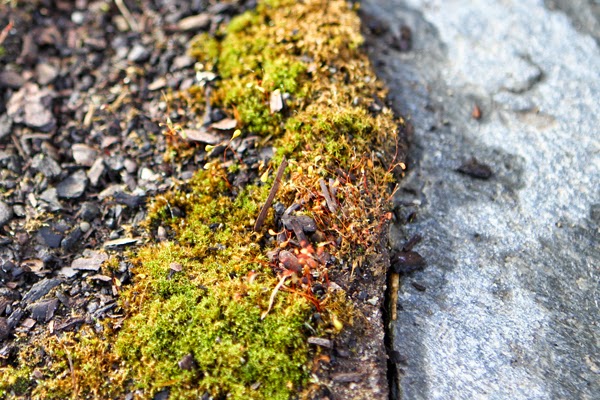 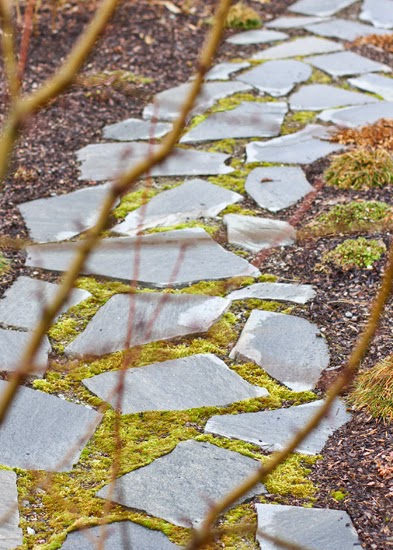 To read about my original buttermilk moss milkshake project, click Here.  I have repeated the process a couple of times to keep encouraging the moss to fill in everywhere, but I still think it's easier than planting a hundred groundcover starts all around the path.
2 comments: