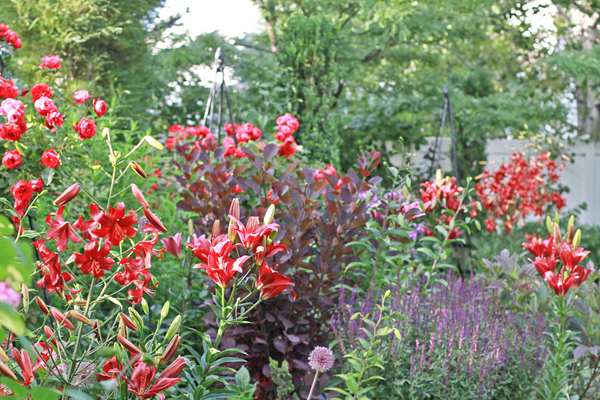 The Northwest corner has featured bold red lilies and roses this month.  Vigorous tetraploid 'Red Velvet' Asiatic lilies continue to multiply by the year.  Upward-facing 'Forza Red' Orienpet lilies are still going strong in their second summer.  Not all lilies survive in my crowded perennial beds (I'm thinking of you, wimpy Oriental lilies), so I'm very pleased to see these types returning well. 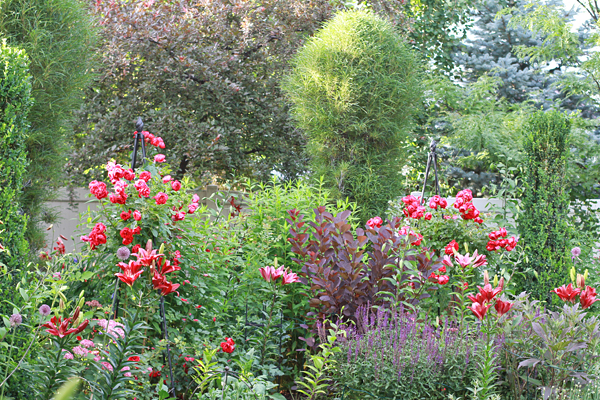 The 'Florentina' climbing roses have been spectacular this year.  I have them tied up to teepees from Gardener's Supply, which has been working well.  I keep recommending this rose to my gardener friends.  The charming old-fasioned blooms last forever on the plant or in the vase.  The only drawbacks are the lack of scent and the tendency of the deeply colored petals to get brown with sunburn on the tops.  They'd do better with afternoon shade, I guess, but I have no plans to move them.

The second flush from 'Caradonna' salvia adds some violet spikes to the color scheme, and a few 'Purple Prince' lilies (also vigorous Orienpet hybrids) add a deep pink.  The 'Royal Purple' smoke bush is finally leafed out and filling its space.  It certainly took its time waking up this spring, as did the 'Berry Awesome' hardy hibiscus that will bloom next month. 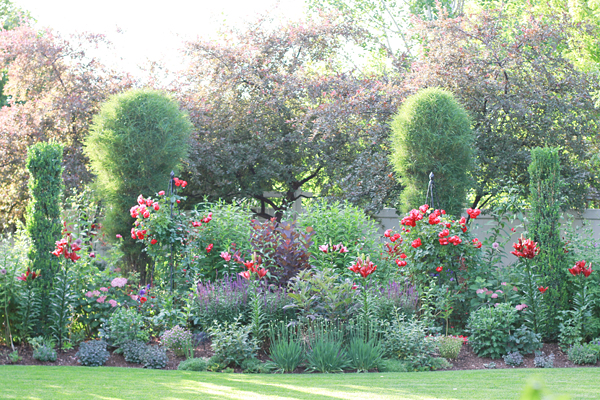 Last year all my dahlias were blooming by this time, but our chilly, wet spring really slowed down their growth.  Not that I'm complaining - with much of the Western United States in severe drought, I'm very happy that our water supply is plentiful this year.  Even though I waited to plant my dahlia tubers until the end of May, some of them rotted in the ground during our rainy June weather.  The ones that survived have sprouted and some have even formed buds, so I'm being patient. 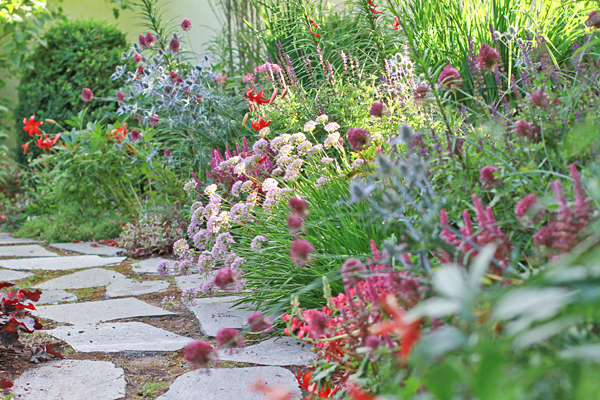 The back side of the NW corner currently features 'Blue Sapphire' sea holly, 'Summer Beauty' alliums, 'Visions in Red' astilbe, drumstick alliums, a few lingering spikes of 'Caradonna' salvia, and more of the 'Red Velvet' lilies. 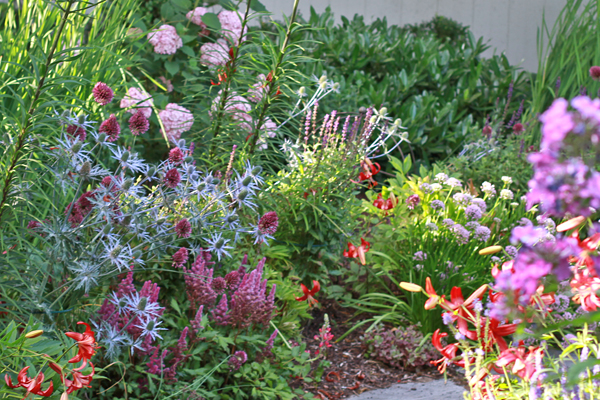 In the background you can see the 'Incrediball Blush' hydrangea I transplanted here this spring.  I think eventually it will be happy with the part-day sun, but so far it wilts unless I water it daily.  These hydrangea flowers last for ages on the plant, remaining attractive even as they age to green.  So I'm willing to keep nursing it along until it gets established.
No comments: