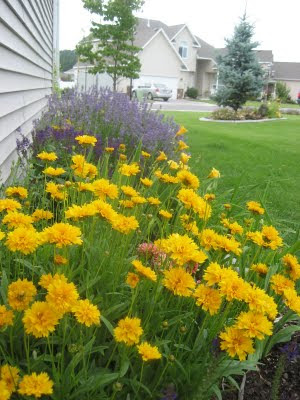 A few other bloggers have mentioned that they'd like to see my garden. I'm afraid they wouldn't be very impressed with my 2 year old landscape. The front yard is going in the right direction, though the plants are still small. The backyard is just a holding area as I try out plants to see where they'd work best in the final backyard design. But I've been pleased with how the west garden bed is coming along. The photo above shows the bed in late June, with the 'Early Sunrise' coreopsis in full golden bloom, contrasting with deep blue-violet 'May Night' salvia and the unlabelled inherited lavender shrubs. 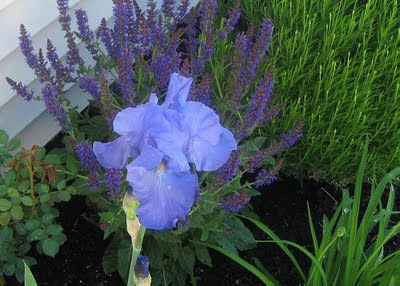 The view in late May and early June included 'Royal Amethyst' iris, shown here with MN salvia. Golden iris and puffballs of periwinkle-blue muscari made a nice contrast, though they aren't included in this picture. 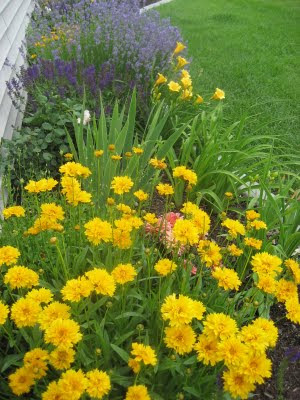 This photo shows another angle of the June garden. You can see the daylily 'Stella d'Oro' blooming near the edge of the bed. 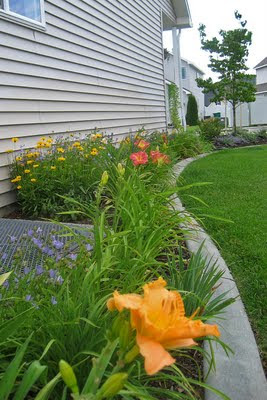 The daylilies have been the stars during July. Here 'Elizabeth Salter' is shown at the bottom, with Sue Rothbauer blooming in the photo's center. 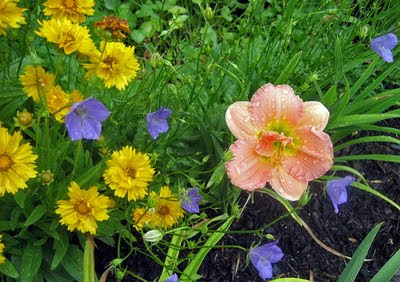 I like the way this peachy 'Siloam Double Classic' daylily blends into the mix. More coreopsis (tickseed) is also shown here with the periwinkle blooms of 'Blue Clips' campanula from my grandmother's garden. 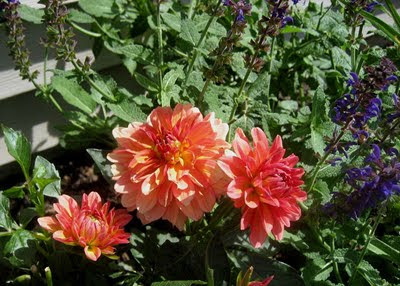 Three pots of no-name rosy-apricot dahlias were purchased from Lowe's on a whim and planted in the border. They look like pictures of 'American Dawn' dahlias in the White Flower Farm catalog, so that's what I'm calling them. 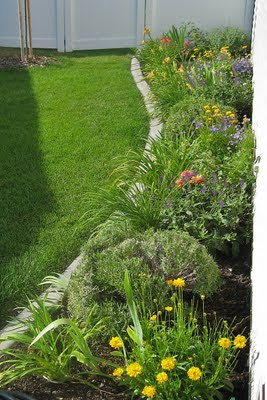 The photo above shows the repeating pattern of the bed. The lavender shrubs look sad after being sheared back following their bloom season. I might replace them with divisions of 'Walker's Low' catmint from the front yard, since WL keeps blooming all season. 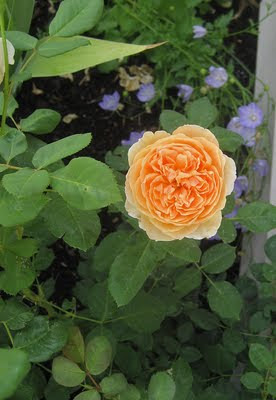 Two 'Crown Princess Margareta' english roses were added after seeing a 2-pack for $20 at Costco this spring. At the north end of the bed, a similarly colored 'Teasing Georgia' english rose will be trained up a trellis against the white fence. 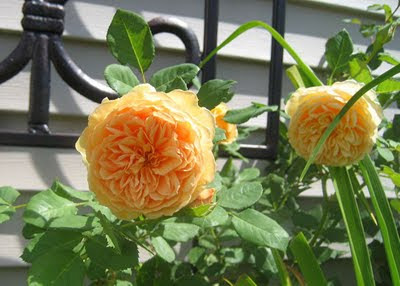 Here's another shot of the flower. This rose is supposed to be very hardy, so the two plants should make good climbers on the black trellises I brought home from Lowe's this week. 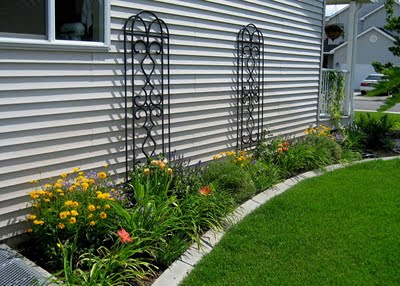 I'll finish with this shot of the garden as it appeared about 10 minutes ago. The trellises add some nice height to the narrow bed and should look even better next year when the english roses are clambering up them. Well, everything should look better next year: the salvia and dahlias will be taller, the daylilies filled out and more floriferous. But this season's photos show promise, don't you think?