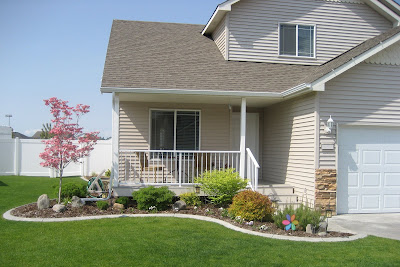 We are about 90% finished with the renovations to the front of our home and landscape, so I'm going ahead and posting some photos. The problem is, the 'before' photo (above) was taken when the plants were pretty and green, while the 'after' photos (below) still show winter landscape. I think you're supposed to do it the other way around, to emphasize how much better the changes look. But I tried to even things out by applying some photoshop trickery to make the 'after' photos look vintage and glowing . . . what do you think? 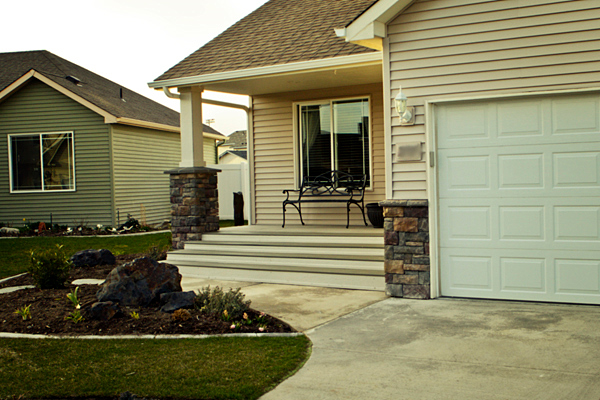 Here are the steps that Susan Morrison, the landscape designer behind Blue Planet Gardening, kindly suggested for our porch. You can see from the top picture that our small porch used to feel very cramped and dark, but the steps and stone column open it up and better balance the Giant Garage on the other side of our house. You might notice that the pink dogwood tree is no longer on the southwest corner of the porch - after watching it fry for 3 summers, hubby moved it to the east side of the house. I'm crossing my fingers that it survives. We're replacing it with a 'Kwanzan' cherry tree to match the other two trees in the front yard. 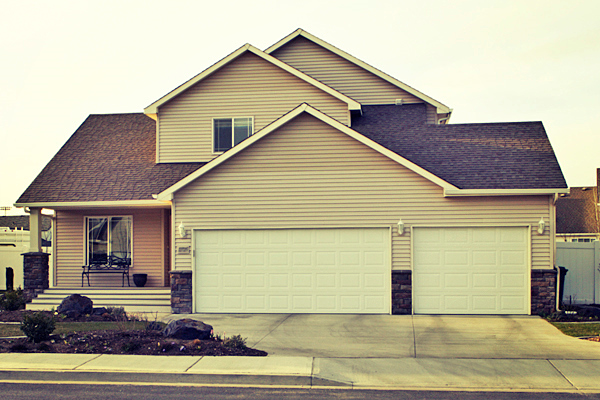 So has anyone else found that renovation projects never go quite as planned? It seemed like there was a little problem or two with each part of the project. The new concrete pad isn't quite level (should have asked for references). So the steps couldn't be quite level. The old composite decking was really faded, so the new planks don't match. Don't even get me started on the strange gutter setup - that's going to get changed eventually. We saved siding from the sides of the house when the masons added stone facing there and used it to replace the gingerbread accent siding above the garage. It doesn't quite match, as you can see, but new siding would have been even worse since it wouldn't have been faded at all. Hopefully the summer sun on our southern exposure will even things up over time. Fade, baby, fade! 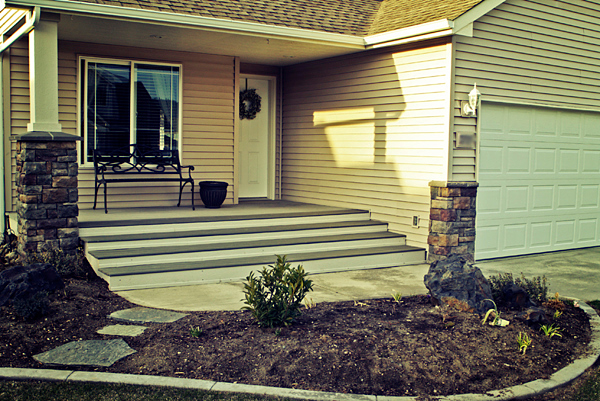 The photo above nearly screams for plants to cover the bare dirt. Getting the rest of the plants in place will really make things look better. We have new lights and shutters sitting in our garage, but hubby has been too busy with other projects to put them up yet. Lately health problems have been slowing me down in the garden and on the computer (my posts might be sporadic for a while here). So all projects are moving along at a snail's pace. 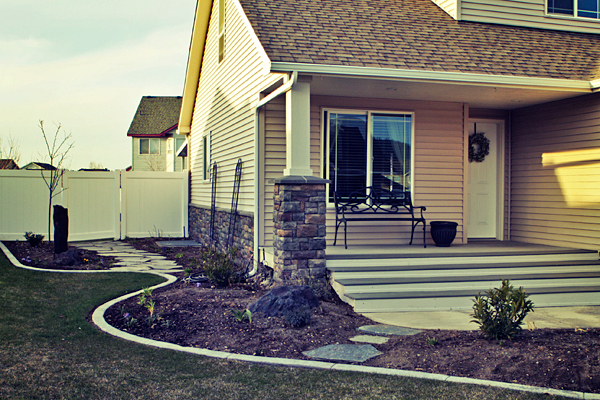 This last shot shows the west garden with its new flagstone path and stone column. When we moved in, that west side was just a spot for the leftover plants that I didn't want in the front. But right now it's the garden that I'm most excited about, especially since our kitchen window looks out that way. I can't wait to enjoy looking at vividly colored blooms on either side of the flagstone while doing piles of not-so-enjoyable dishes.
Thanks again to Susan for the great steps idea. I hope to post pictures of the 100% finished project eventually . . .