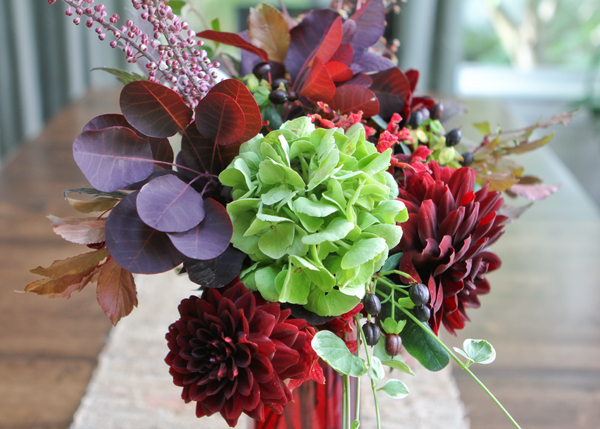 Last month I created this moody fall vase with the flowers blooming in my September garden.  Like most gardeners, I focused first on creating a flower-filled June garden, but I've been expanding my palette to have good cutting flowers earlier and later in the year. 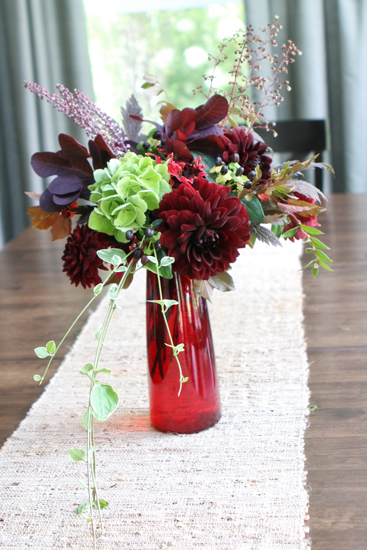 The main players in this vase are Karma Choc dahlias and a stem from my new Cape Lookout hydrangea, which opens white and ages to green and then pink.  It's really lovely, and I'm hoping this hardier version will bloom next year for me despite the early fall and late spring frosts in our valley.  After babying my Let's Dance Big Easy hydrangeas this year with plenty of water and fertlizer, I finally had one covered in buds . . . but it frosted before they could open. 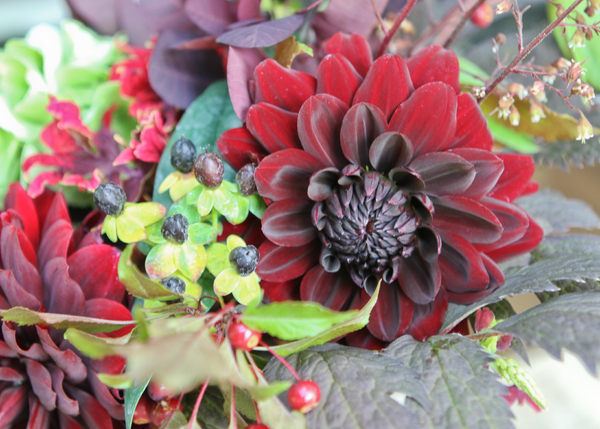 Karma Choc dahlias are delicious to the eye, aren't they?  These read as black in some lights and were planted in my black and white garden section.  Their dark foliage was a plus.  A stem of Magical Desire hypericum berries at the left were peach last month then ripened to this interesting plum/black color.  I also included some stems from my 'Royal Raindrops' crabapple tree with their tiny red crabapples. 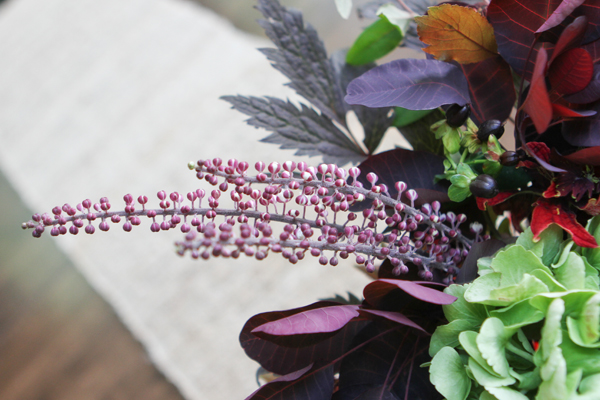 I carefully selected some unopened 'Chocoholic' actaea buds for their texture.  These have such a strong fragrance when open that they might overpower some noses inside, though they're lovely to sniff when outside.
I really enjoyed growing several types of dahlia this year, although they often grew taller than I expected and looked odd in the landscape.  After recent frosts turned the foliage to mush, I started digging my dahlia tubers to store for next year.  But I don't have an ideal place for them.  My basement is too warm, my fridge is too cold, and my garage fluctuates too much in temperature from warm car engines (it's pretty hot in there this week, but by January it might freeze at night).  I think I'm just going to let mine rot in the ground and buy more tubers next spring.  Swan Island has the largest selection of dahlias I've seen, Floret Farm has the prettiest pictures, and Brent and Becky's Bulbs has the best prices on their small selection.